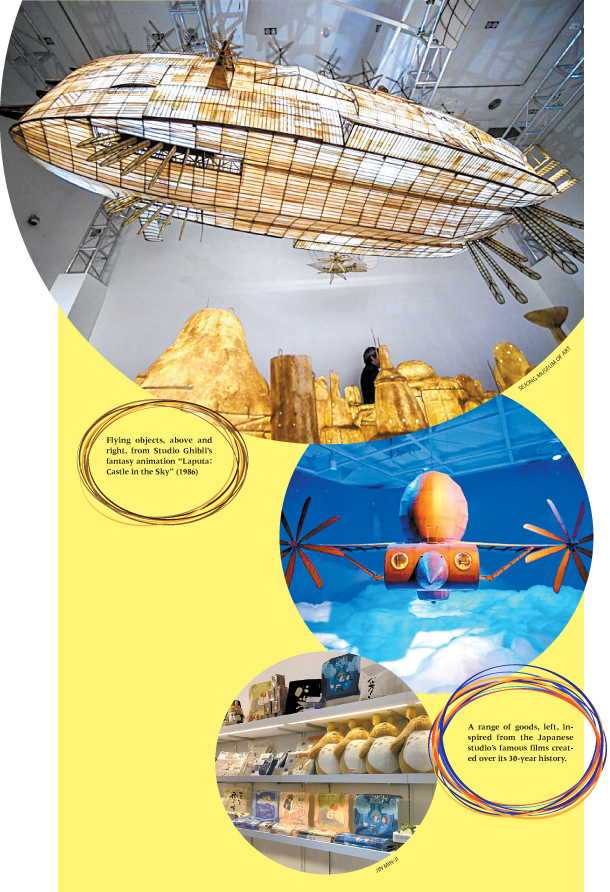 Fans of Studio Ghibli will have a reason to celebrate this winter as the renowned Japanese film studio behind the award-winning “Spirited Away” (2001) and “Howl’s Moving Castle” (2004) is holding a special exhibition in Seoul.

For the next three months, the “Studio Ghibli Special Exhibition” will offer fans a chance to look back at the history of the studio and learn about the films it has produced, from its earliest movie “Nausicaa of the Valley of Wind” (1984) to its most recent “When Marnie was There” (2014).

Two- and three-dimensional artworks from a total of 24 animated films, including “Kiki’s Delivery Service” (1989) and “My Neighbor Totoro” (1988), are on display at the Sejong Museum of Art in central Seoul.

“It has been roughly 30 years since Studio Ghibli was established. Though it created many movies that had commercial success in Japan, the studio has never really disclosed how it has made movies,” said Ghibli producer Takayuki Aoki on Monday at the exhibition’s opening held at the Sejong Museum of Art.

“There is one key [concept] of the exhibition, which is working together with a large number of people. While working with different people, it is important to observe and communicate well with others,” the producer explained, adding that the completed films are the outcome of such cooperation.

Upon entering the two-floored exhibition, the studio’s mascot Totoro from “My Neighbor Totoro” welcomes visitors behind a counter, placed among its beloved acorns and surrounded by framed scenes from Ghibli films on the walls.

On the first floor, original sketches from Ghibli movies, illustrations and promotional posters are on display in the order of each film’s release dates. Print advertisements and even hand-written schedules for promotional events are also exhibited for fans to get a look into a film’s production process.

At the end of the first floor’s exhibit is a display packed with goods from the studio’s beloved stories, including posters, film soundtracks, comic books and dolls in the shape of the studio’s popular characters like Ponyo from “Ponyo on the Cliff” (2008) and the adorable fuzzy soot sprites from “Spirited Away.” 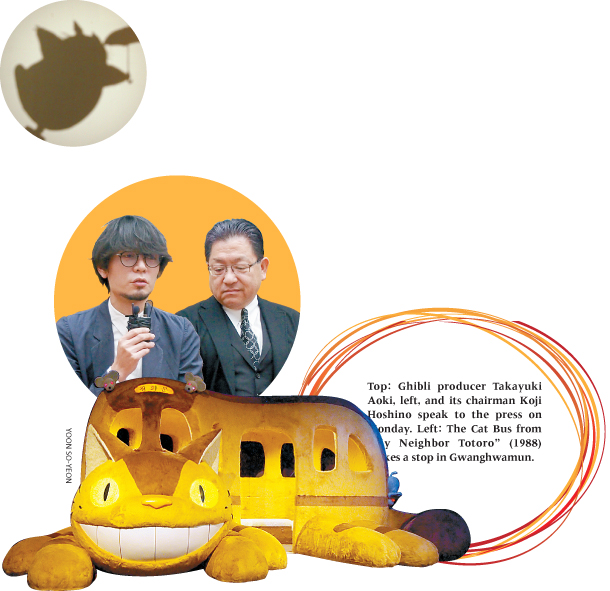 But the highlight of the exhibition awaits on the second floor, where an overwhelmingly large wooden airship from “Laputa: Castle in the Sky” dominates the space. The well-lit airship gently moves up and down in the center of the room, making it look like it is floating.

The exhibition ends with the Cat Bus from “My Neighbor Totoro,” fitted with a sign in the front of the bus noting that Gwanghwamun is its destination.

The latest exhibition is the fourth Ghibli exhibition to have landed in Korea, but it is the first time for the revered studio to reveal the process of how it produces films in an exhibit outside of Japan, according to the studio’s chairman, Koji Hoshino, who also visited Korea for the exhibition’s opening ceremony.

During the press event, the chairman added that Ghibli co-founder and Japanese animation guru Hayao Miyazaki is currently working on two animated feature films with his son Goro Miyazaki, which is unprecedented for Ghibli.

“Miyazaki started learning computer graphics after he turned 70, and created several short animations [utilizing the techniques]. But Miyazaki will utilize hand-drawing techniques in his new feature animations,” said Hoshino. He added that the two films are scheduled to arrive in theaters in 2020 at the earliest.

According to Japanese media outlets, one of Ghibli’s upcoming animated features is titled “How Will You Live?,” which shares its title with a 1937 novel by Genzaburo Yoshino that follows a teenager’s emotional development as he grows up, and his relationship with those around him.