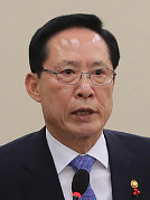 Defense Minister Song Young-moo is a very genuine person. He doesn’t calculate consequences. He only talks about his beliefs. Even when his remarks stirred a controversy, he never defended himself to the Blue House by saying it was a misunderstanding. He just tried to cheer up his officers by saying, “It’s my fault.”

Song and President Moon Jae-in have a very deep relationship. Before the 2012 presidential election, Song joined the Moon campaign as a rare member from the military. Even after Moon’s defeat, Song was the only soldier who stayed with Moon. In the spring of last year, when the Park Geun-hye administration was still extremely powerful, Song and Moon alone visited Baeknyeong Island and spent their two-day trip having honest talks. It was reported that Moon was truly impressed with Song.

After a lawmaker asked Song during a National Assembly hearing what he thinks about the controversial release of former Defense Minister Kim Kwan-jin from the prosecution’s custody during a criminal investigation, Song responded, “It’s a good thing.”

The ruling Democratic Party was furious with his answer, but Song thought differently about the matter. Moon’s ambitious project of defense reform requires that military generals be loyal to the former defense minister Kim, and Song concluded that it was necessary to appease them. Many military generals were promoted by Kim, and Song made the calculated move, based on this reality.

Song’s remark that he would consider the possible redeployment of U.S. tactical weapons is a similar move. Although he agrees with Moon’s position that the deployment is unacceptable, he said publicly that he is considering the option in order to use it against China.

And yet, Blue House secretaries are trying to remove Song, calling him a “hostile minister who is reducing the president’s approval rating.” But the truth is the opposite. Moon’s approval rating is over 70 percent, and about 30 percent of it is from conservatives. The conservatives are supporting Moon, who said “I cannot call the North a main enemy,” because he appointed Song as his defense minister, who made it clear that the North Korean regime is a clear enemy of the South.

Sources said Song is able to speak freely because Moon has encouraged him to do so, saying, “the state and defense secretaries of the United States often have different opinions from the president. Why can’t we do that?”

If Moon replaces Song after listening to the conspiracy of his presidential aides, the conservatives will turn away and his approval rating will plummet. That will be a great tragedy for not only Moon, but also the country’s security.

But Song is different from other ministers. “The country must let the defense minister defend the country,” he said. It’s been more than half a year since the administration was launched, and Song is perhaps the only minister whose position remains strong.

“I barely managed to climb a mountain [the confirmation hearing], but now I am facing a deep river. I am lonely,” Song reportedly said recently. Although he needs to complete defense reform, a project to reduce troops by 100,000 before the end of Moon’s term, resistance is tremendous while rumors continue that he will soon be replaced. Song’s comment must have been based on hardship.

Moon’s judgment is important. Although the military has a budget of 46 trillion won ($42 billion), which is dozens of times higher than that of the North Korean military, it said that it has no ability to deter the North Korean nuclear threats.

Reforming this military is the president’s long-cherished wish. And there is no one other than Song who can push forward this project without any hidden motives. We must show faith in him. He will be remembered as a leader in the history of Korea’s national security.