Famed director Kim Ki-duk to be fined for assault charge : Actress filed claims against filmmaker after working on 2013 movie

Famed director Kim Ki-duk to be fined for assault charge : Actress filed claims against filmmaker after working on 2013 movie 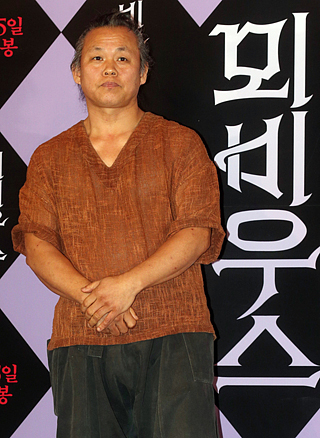 Leading Korean art-house film director Kim Ki-duk will likely be charged a fine for physically assaulting an actress during the filming of his 2013 movie “Moebius.”

The Seoul Central District Prosecutors’ Office said Thursday that it has indicted Kim on a summary offense with a penalty of 5 million won ($4,500) for hitting and insulting the actress, but cleared him of other charges, including defamation and abuse, filed by the actress.

The actress, whose identity was withheld, filed a complaint with the prosecution in August, demanding an investigation into Kim.

She argued the director slapped and verbally abused her as “part of an acting lesson” to get her to empathize with her role, and forced her to shoot a sex scene that was not agreed upon beforehand. She withdrew from the production, and Lee Eun-woo replaced the role.

The 57-year-old filmmaker acknowledged the incident in August, but denied assault, saying it was a move to stimulate the actress’ emotions for the role.

“On our first day on set, we were shooting a fierce fighting scene between husband and wife beating each other. My memory has been clouded because it was four years ago, but as far as I remember, I either slapped the actress from her partner’s subjective point of view, or I would have slapped my own face, showing her how far I wanted her to go,” said Kim in a statement through his production company A Kim Ki-duk Film.

“In either case, the incident happened out of [the need] to make the film more realistic as a director. I had nothing personal against her.”

But the prosecutor decided that violence cannot be justified even if the director was trying to “coach” her, and therefore, levied heavy fines for the assault.

“Though it is a penalty fine, [Kim was given a heavy fine] to eradicate the harmful practices deeply embedded in the film industry,” said a source with the prosecutor’s office.

As for the allegation that he forced her into shooting explicit scenes, the director said he does not remember having done so.

The actress initially did not file a complaint against the director out of fear of facing damage to her career, but decided to bring up the issue in January, backed by the Federation of Korea Movie Workers’ Union (FKMWU).

Kim is best known for his 2012 drama “Pieta,” which landed him the Golden Lion Prize at the Venice Film Festival.

Though he is the first filmmaker in Korea to have been invited to the world’s three major international film festivals - Cannes, Venice and Berlin - the director has remained controversial throughout his career because of his frequent use of violence and disturbing scenes in his movies.

Kim is currently working on an upcoming film, “Human, Space, Time and Human” (working title), which will take a look at how humanity has survived by revealing the true nature of the human race.