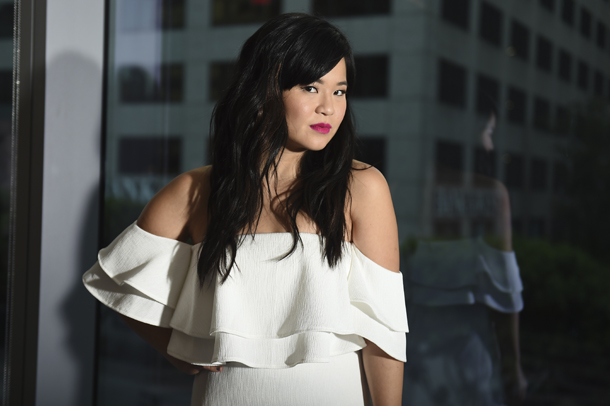 Actress Kelly Marie Tran stars as Rose in the latest installment of the “Star Wars” franchise, in theaters on Dec. 15. [AP/YONHAP]

The 28-year-old was about to give up on her dreams of becoming an actress when she landed a breakthrough role in “The Last Jedi.’’

So after years of toiling and hoping and working disposable jobs, Tran is now a movie star, the kind of person who holds hands with Laura Dern at media events and considers Gwendoline Christie a good friend.

“I know, right? Let me pinch myself real quick,’’ Tran said, her effervescent excitement bright and obvious. “I am just trying to stay present and really trying to experience every moment of this. It still feels very impossible and very much like it’s all a big dream or something.’’

Tran was plucked from obscurity to play Rose Tico, a Resistance mechanic in “The Last Jedi.’’ Rose idolizes Resistance fighters like pilot Poe Dameron and former Stormtrooper Finn, but does her work behind the scenes.

“She’s never been someone who has been in the limelight,’’ Tran said of her character. “And then we get to see her get pulled into the forefront of the action, and you see how she deals with it.’’

Sounds like art imitating life for a certain actress.

“And Kelly just, I don’t know, she really jumped out at me as someone who I was looking for in the character,’’ he said. “I wanted someone who - thinking back to me as a kid being a genuine nerd you could relate to - someone who didn’t feel like they belong; someone you wouldn’t necessarily imagine as a big Star Wars hero. Let’s throw them in the mix and see the world through their eyes.’’

John Boyega, who plays Finn, said he could tell during the audition process that Tran had something special.

“We would do chemistry reads and it was so blatant from the beginning that she was the right girl for the part,’’ he said.

Both Boyega and Daisy Ridley (Rey) were also relative unknowns when they joined the Star Wars universe for 2015’s “The Force Awakens,’’ and Tran said they’ve been like spirit guides as she navigates a new world of international appearances and near-religious fandom.

“It is such a strange experience,’’ she said. “You know, it’s not like taking your driver’s test or breaking up with your boyfriend, where you can call whoever you want to be like, ‘Hey, remember when that happened?’ This is truly like you have two other people you could talk to about it.’’

Tran’s family is also keeping her grounded. She said her Vietnamese immigrant parents were raised far from Star Wars and Hollywood.

“I think that my family not being from this industry at all has really helped,’’ she said. “Just because I go home and my mom is like, ‘Wash the dishes,’ you know, and it’s just great.’’

Tran, however, is a Southern Californian who grew up on pop culture, even though she didn’t see many reflections of herself in it. Tran said she relishes the chance to portray a Star Wars hero as an Asian-American woman.

“I remember when I was really young and I felt like I needed to see someone that looked like me do something impossible,’’ she said. “I wanted to look like everyone else in movies and books and TV shows, and because no one looked like me, I wanted to change. And I think about that a lot. I think about the idea of all these young kids and what would the world be if we all were so confident that we never spent any time wanting to be anyone else. So it means a lot to me.’’

Take that from a newly minted movie star.