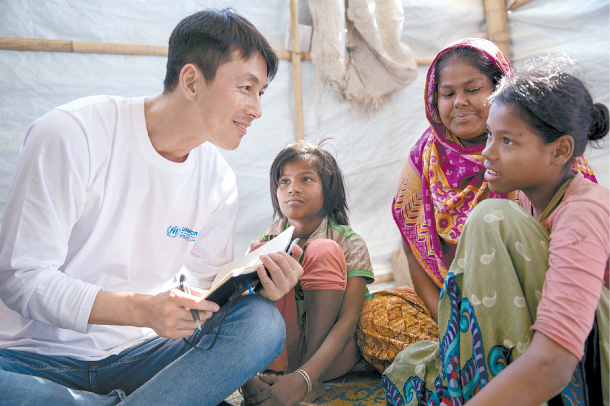 Actor Jung Woo-sung listens to the stories of Rohingya at a refugee camp in Cox’s Bazar, Bangladesh, during his visit from Dec. 3 to 6.[UN High Commissioner for Refugees]

More than 2,000 Rohingya have been slaughtered by Burmese troops and Buddhist mobs in the state of Rakhine, and over 600,000 have fled the country, mostly to neighboring Bangladesh. Yet Myanmar’s national security adviser, U Thaung Tun, told the United Nations Security Council in September that there is no genocide taking place - and two months later, an officer in Rakhine’s state security ministry reportedly said, “There is no such thing as Rohingya. It is fake news.”

The Rohingya, a mostly Muslim ethnic group, have since 1982 been denied citizenship in Myanmar, a Buddhist majority country, and are therefore not listed as one of the nation’s 135 official ethnic groups. They are stateless, and even within their own homeland, their existence is denied. Since August, the UN High Commissioner for Human Rights reports 307,500 Rohingya have settled in Cox’s Bazar, Bangladesh, on the border of Myanmar.

Korean actor Jung Woo-sung left Incheon International Airport last Sunday for a four-day visit to meet Rohingya refugees in Cox’s Bazar. Jung, who had his breakout role in the 1997 movie “Beat” and is best known for his recent role as the antagonist in “The King,” was named a National Goodwill Ambassador in June 2015 for the UN High Commissioner for Refugees (UNHCR). He has since visited Nepal, South Sudan, Lebanon, Iraq and, most recently, Bangladesh.

Every year, Jung gives 50 million won ($46,000) to humanitarian aid. He agreed to an email interview from Cox’s Bazar on Monday with the JoongAng Ilbo, an affiliate of the Korea JoongAng Daily.

Q. Why did you decide to visit Rohingya refugees?

A. I was given the opportunity to dine with Filippo Grandi, the UN High Commissioner for Refugees, when he visited Korea in November, and heard him speak about the harsh conditions the refugees face. He requested a goodwill ambassador from the Asian region to go, and wished to spread more awareness about the issue, particularly in Korea. I made up my mind to go at that moment.

It’s a lot worse than I thought, so I was quite surprised when I got here. The asylum seekers say more than a thousand of people cross the border on any given day. Because there was a sudden rise in the number of people arriving at the camp, which was not ready to accommodate that many people, finding space has become a serious problem. I’m concerned that the shelter is getting really cramped. Hygiene and sanitation is also not good.

How did you feel when you met the refugees?

Most of the refugees I’ve met [in the past] have longed for their homes and always had the hope they would one day return, but it doesn’t seem like Rohingya long for that. They fear [Myanmar]. They don’t understand why they face persecution and think that only if the world pays more interest and attention to Rohingya, will a political solution be found.

You have consistently given donations. Could you speak on that?

I have always felt the need to give back for the love I receive from the public. When UNHCR reached out and offered me a position as a goodwill ambassador, I decided I couldn’t postpone giving back anymore. When I listen to the stories of refugees at the shelter, I realize that on any given day, an ordinary person can face adversity or seek refuge at the risk of their lives, and this possibility begins to feel very real. For these asylum seekers, they did not have an option. It was not a matter of choice.

Do you think that having more interest and awareness about the refugees will be enough to help them?

Of course. All sharing stems from someone’s interest. By continuously spreading awareness about refugees, a nation, an individual, a corporation will take interest and start helping these people. Besides Syrian and Rohingya refugees, there are so many refugees in the world who have been forgotten. I believe that having interest in their stories is a way we can bring much-needed peace to the world.

More people are gradually taking notice of famous people who are volunteering. What are your thoughts on this?

I am only doing what I think I must. I actually feel more burdened by the excessive compliments and attention people give to my volunteering. What I can say, though, is that when the time for sharing comes, don’t hesitate. Act.