Models are just like the real trains but smaller

Models are just like the real trains but smaller 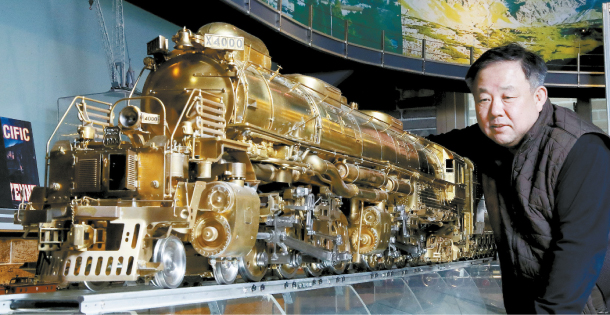 Lee Hyun-man looks at a miniature version of the Union Pacific Big Boy at his museum and cafe in Incheon. [WOO SANG-JO]

Next to Incheon Grand Park’s zoo is a train museum, which is also a cafe. The owner of the museum and cafe is Lee Hyun-man, 61, who has been making model trains for around 40 years.

After graduating middle school, Lee actually worked at a model train company for 10 years. But he didn’t want to make toy trains that didn’t have any functions. He left the company and opened up a small factory in Bucheon, Gyeonggi.

Today he is considered a master by model train fans around the world.

The model train museum and cafe opened on Nov. 25. It is filled with model trains that Lee created throughout this life, including a British steam locomotive, a U.S. mail delivery train from the 1950s and the Japanese National Railways’ Class EF66 electric locomotive.

He has made roughly 260 trains, each from a different country. They are highly detailed not only on the exteriors but also inside - exact replicas of the original trains.

Of course, all the trains actually move on tracks with electric motors. Lee believes if a model train can’t move, it’s useless. A model village has been set up in the middle of the museum, and a steam locomotive passes through with a unique whistle.

Lee takes commissions from foreign companies to make model trains, with orders of more than 100 units. He gets orders from the United States, Germany, Australia, Italy, Britain and Japan. The company sends designs and pictures of the actual train that will be copied. Each model will have 1,500 to 3,000 parts and orders take about six month to a year to complete. The prices vary depending on the quality and complexity. Lee makes an additional unit or two to be kept for his museum.

Lee said the Union Pacific Big Boy was the model he is most proud of. It took him five years to make a 1/16 scale model, which is 225 centimeters (7 feet) long and weighs 200 kilograms (441 pounds).

Initially there was a request in building four Big Boys, which he refused to accept because he didn’t have the time and the manpower. Instead he built one for himself. When the train model was finished, it was introduced on the German newspaper BILD and the Union Pacific called contacted Lee where they offered him 200 million won ($183,000) so it would be displayed at its’ museum. But Lee, because of his attachment on the train model that he had spent so much time and effort, refused, and continues to keep it in his own museum.

“There were times when I really wanted to quit when I was making trains that were difficult and took a long time,” Lee said. “But when they were completed, the feeling of achievement can’t be expressed in words.”

Lee said his next project is a model of the space shuttle Columbus.