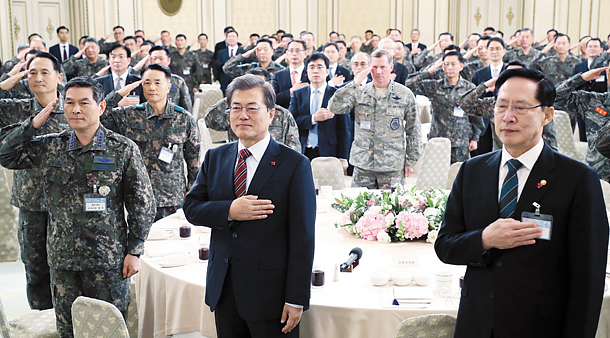 President Moon Jae-in, center, has a meeting with some 150 military commanders in the Blue House on Friday. Moon directed them to prepare for an early transfer of wartime operational control of South Korean troops from the United States. He also called on his top military officers to build up the country’s defense capabilities to prevent North Korea from making any reckless provocations. [YONHAP]

President Moon Jae-in called on his top military officers Friday to build up the country’s defense capabilities to overwhelm and prevent North Korea from making any reckless provocations.

During a meeting with some 150 military commanders, he also directed them to prepare for an early transfer of wartime operational control of South Korean troops from the United States.

“Right now, our military faces a very serious situation where North Korea’s nuclear and missile threats are fast becoming more real and advanced,” the president said at the luncheon at his office Blue House.

“The military’s role is more important than ever,” he added. “The military is our last line of defense against North Korea’s nuclear weapons and missile threats.”

It marked Moon’s second meeting with top military commanders since taking office in May, and the first of its kind following a personnel reshuffle that replaced the chiefs of all three divisions of the armed forces and other military commanders.

The meeting also followed the North’s latest missile provocation on Nov. 29, marking a resumption of North Korean provocations after a 75-day hiatus.

Pyongyang has staged 11 missile tests since the Moon administration came into office, along with its sixth and most powerful nuclear test so far, staged Sept. 3.

“First, we must realize superiority over North Korea based on overwhelming power to ensure our own peace and security. Securing a strong deterrence against North Korea is a way of expressing our firm determination that we will not allow North Korean provocations or another war on the Korean Peninsula,” the president told the meeting, according to Blue House pool reports.

In a bilateral summit held last month in Seoul, Moon and his U.S. counterpart Donald Trump agreed to speed up Seoul’s acquisition or development of new and advanced strategic military assets as a way of building its own measures to counter North Korean provocations.

Such assets may include nuclear-powered submarines, which are considered an answer to North Korea’s submarine-launched ballistic missiles.

Building up the country’s own defense capabilities also requires having control over its own military, President Moon insisted.

“Second, we must quickly meet the conditions for the transfer of the wartime operational control of our military based on a strong South Korea-U.S. alliance. I especially ask you to strengthen our military’s key capabilities and the ability to work with others so that we may realize a defense system that can guarantee our own security,” he said.

Seoul was originally scheduled to have its opcon back from Washington in 2015, but its former conservative administration had postponed the transfer indefinitely, citing a possible reduction in joint defense capabilities of South Korean and U.S. troops stationed here. The United States currently has some 28,500 forces stationed in South Korea under its bilateral defense alliance with South Korea.

President Moon said the ongoing defense reform too was aimed at building a stronger military.

Still, the president also stressed the need for the military to change the way it treats its members.

“Let us boldly change our military’s constitution in line with our country’s development. Let us greatly improve our troops’ working conditions and protection of their human rights,” Moon said.

The president also called for the military’s support to make the upcoming PyeongChang Winter Olympic Games a successful event.

“The government is doing its utmost to turn the PyeongChang Winter Olympics and Paralympic Games into a chance to reestablish peace on the Korean Peninsula. I ask the military to actively support the move by making them a safe and successful Olympic Games through its thorough defense readiness,” he said.