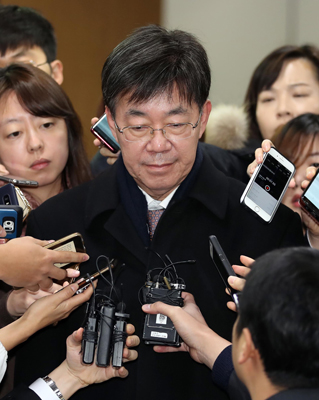 A former Seoul prosecution chief accused of giving free meals and money to subordinates was acquitted by a Seoul court of corruption charges Friday.

The Seoul Central District Court found Lee Young-ryeol not guilty in its ruling of his controversial treatment in April of two prosecutors, who were then dispatched to the justice ministry. Lee, 59, was dismissed as chief of the Seoul Central District Prosecutors’ Office immediately after the incident was disclosed in June, stirring public outrage and emboldening President Moon Jae-in’s drive for prosecution reform.

He provided each of the two officials with 1 million won ($926) in cash and a meal worth 95,000 won during a private dinner meeting. He was indicted in June for violating a new anti-graft law enacted to articulate acts of corruption and toughen punishment for violators. Prosecutors demanded a pecuniary fine of 5 million won.

But the court acknowledged that his act is exempt from the regulations. It noted the law does not apply to meals and gifts that higher officials give subordinates as encouragement.

The cash doled out by Lee is also not punishable by the criminal code, which applies when the money provided is in excess of 1 million won. The court said he could face a penalty in a separate administrative proceeding. The incident drew keen attention because the dinner was offered for a prosecution team in charge of the investigation of a corruption scandal involving former President Park Geun-hye. It was co-hosted by a senior justice ministry official who is a close acquaintance of Park’s key aide who was probed in the case.