Kim In-kyung on Sunday finished runner-up at the Omega Dubai Ladies Classic, the last tournament of the season for Korean women golfers. 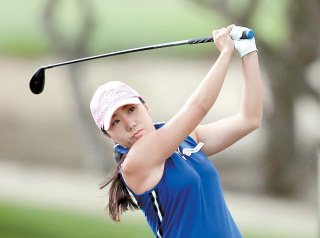 Kim In-kyung watches her shot during the final round of the Omega Dubai Ladies Classic at the Emirates Golf Club on Sunday. [AP/YONHAP]

Kim started the day four shots behind the leader and had to move up five spots to win the tournament.

But after shooting seven under par with eight birdies and a bogey, she ended up tied with Angel Yin of the United States and Celine Herbin of France, forcing the tournament into a playoff.

In the final round, the par-three 15th hole gave Kim her biggest disappointment, as a 10-meter (32.8-foot) birdie putt leaped out.

After a birdie on the par-four 16th, Kim was given a chance for an eagle on the 17th by hitting the green in one, but she missed her shot at sole lead by missing a 2-meter putt.

On the other side, Yin got off to a better start, making three consecutive birdies from the par-four 2nd. After hitting her second shot into the hazard on the 18th hole, it was uncertain whether Yin would tie for the lead, but she made a long par putt and secured a spot in the sudden-death playoff.

Yin and Kim both made birdies on the 18th, the first playoff hole, eliminating Herbin. Then on the par-four 17th, the second playoff hole, Kim failed to hit the green in one by pushing her tee shot, robbing her chance of a fifth career victory on the Ladies European Tour.

“I hit the ball well and gave myself a lot of opportunities,” Kim was quoted as saying on the LPGA website. “I think it just paid off, staying patient, to birdie the last two holes.”

This season has by far been the best of Kim’s career. The 29-year-old golfer won the ShopRite Classic, Marathon Classic and Ricoh Women’s British Open. She is tied with Feng Shanshan for most number of wins, and her victory at the British Open was her first major title, after playing in 46 major tournaments - and after a nightmare tournament at the 2012 Kraft Nabisco Championship where she missed her chance of winning her first major by missing a tap-in putt on the last hole.

For her performance this season, the LPGA Tour selected her as the “biggest surprise” of 2017.

Despite the success, Kim had some disappointments toward the end of the season. She had to withdraw from the LPGA KEB Hana Bank Championship due to a stomachache and skip the Toto Japan Classic after losing her passport.

Following the unexpected two-week break, Kim competed at the Blue Bay LPGA event, finishing 25th. Of the five Asian Swing events, Kim only played in one tournament, excluding the withdrawal, leading Kim to finish 12th in the 2017 LPGA money list.

After the Asian Swing, Kim returned to the United States in November and competed in the LPGA Tour’s season finale, finishing tied for eighth. She was the only player on the money list’s top 20 to have played in less than 20 tournaments, with 17.