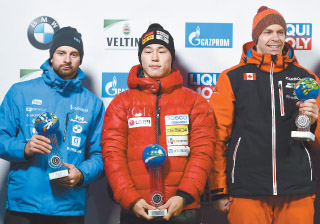 From left, Martin Dukurs of Latvia, Yun Sung-bin of Korea and Dave Greszczyszyn of Canada hold up their medals after the IBSF World Cup event in Winterberg, Germany, on Friday. [YONHAP]

The 23-year-old skeleton racer finished the first run with a time of 56.62 seconds, a slim 0.06 of a second ahead of Martin Dukurs of Latvia. Dave Greszczysyzn of Canada finished third with 56.88.

A second run was set to determine the final ranking, but it was canceled due to heavy snow and wind.

Still, Yun’s record in Germany proved to be dominant in the field, as he finished first in the practice races as well.

With another victory, Yun has extended his lead in the World Cup standing with 885 points for the season, 64 points ahead of Dukurs.

The IBSF holds several World Cup events around the world each season. Looking across Yun’s career, he has seen better results in North America, where he has done offseason training in Canada since he first started in skeleton. Out of four IBSF World Cup victories before his most recent title, three of them were in North America, and the other one, his first career title, was in St. Moritz, Switzerland.

Yun’s streak of bad luck in Germany continued in the 2016-17 season, where Yun finished fifth in Altenberg and Winterberg, and runner-up in Konigssee.

“I think it was possible for me to play well at events in North America because I had more experience there,” Yun said prior to the event last week. “I’ll work harder to race like I did in Europe as well.”

Yun’s success has raised expectations about Korea winning its first gold medal in skeleton at next year’s Winter Olympics.

From his experience in international events, Yun appears to have improved his track management skills significantly. Two weeks ago, Yun dominated the Whistler track, known for its 16 difficult curves and where the skeleton races for the 2010 Vancouver Winter Olympics were held, without hitting the ice wall once.

To race faster, Yun has been experimenting with his weight during the offseason. He first gained weight - going from 75 kilograms (165 pounds) to 90 kilograms - thinking it would help him slide down the track faster.

But it didn’t always help, so Yun went on several diets to finally settle at 86 kilograms.

There’s another significant factor in Yun’s performance: home court advantage. During this year’s offseason, Yun was practicing eight times a day at the Alpensia Sliding Centre in Pyeongchang, where next year’s Olympics will be held.

Yun heads to Innsbruk, Austria, this Friday for his next IBSF World Cup event.