Paying for insurance is a marathon, or a sprint

Paying for insurance is a marathon, or a sprint 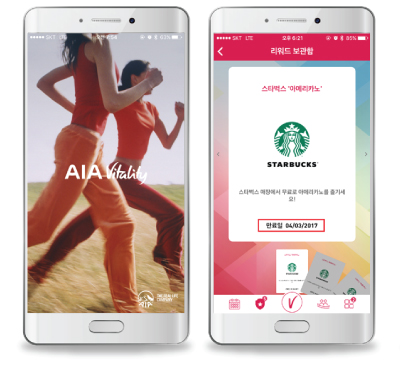 A screen shot of the AIA Insurance Vitality app that the company’s Korean employees are currently using. [AIA KOREA]

Song Wan-joo, a 42 year old businessman, completes a grueling hour-long workout program four days a week with a group of people who are half his age. Although he has always tried to stay fit, he decided to take up the much tougher CrossFit regimen three years ago in an effort not only to lose weight but also to further improve his health.

Song even pits himself against other competitors on the infamous muddy obstacle course of the Reebok Spartan Race every year. He has never missed the event ever since he started CrossFit.

Although Song has life insurance, he never really benefited from the healthier lifestyle that he has been working on in recent years.

But as early as next year, he may see the cost of his life insurance drop thanks to the time he spends working out.

The Korean arm of AIA Life Insurance is preparing to launch the health management “Vitality” program, which was developed by South African insurer Discovery 20 years ago.

AIA, which has the exclusive rights, is hoping to launch the health-related insurance product in April next year.

The insurance products offer various benefits including discounts on insurance subscriptions, higher claims and even Starbucks coupons when subscribers follow through with their health goals.

To subscribe to the product, a client only needs to download the AIA Vitality app, connect it with a workout app and set weekly workout goals.

The Vitality app then automatically accumulates points based on users’ workouts. For example, 50 points will be rewarded to a user who walks 7,500 steps a day or exercises for 30 minutes and at 60 percent the maximum heart rate for the age group.

The reward doubles to 100 points a day when that exercise intensifies to walking 12,500 steps or exercising for an hour at 60 percent the maximum heart rate for the age group.

Currently only a limited number of AIA Korea employees are in the program as a trial process before a commercial launch next year.

“While the Vitality program in the early stages will be focused on exercise, it could later be expanded to changes in overall lifestyle, such as giving more incentives to those that purchase organic foods,” said an AIA official.

AIA Vitality is available in five countries - South Africa, the United Kingdom, the United States, China and Singapore - and has over five million people subscribing to it.

SK C&C is also jumping into the tech incorporated behavior economics insurance business, announcing on Nov. 29 that it has signed a partnership with AIA’s Korean branch to develop a health management platform that runs on Avril, SK’s artificial intelligence platform based on IBM’s Watson. SK C&C hopes that its platform will provide a more sophisticated health management program that is customized to meet users’ physical conditions and preferences.

“Applying the various digital transformation technologies from AI to cloud storage and big data analysis, we will actively cooperate so that AIA Vitality will lead its customer to a healthier life,” explained SK C&C CEO Chang Dong-hyun.

According to industry sources, AIA wasn’t the only one that was interested in launching the Vitality program in Korea. The country’s largest life insurer Samsung Life Insurance was said to have approached Discovery but backed out after learning that AIA has exclusive rights.

“We’ve long thought about how we can reward health and life insurance clients for healthy lifestyle choices combined with insurance products. We’ve released a product with a similar concept. For instance, Samsung Life Insurance launched critical illness insurance that provides a mobile gift card for walking 3 million steps a year,” said a Samsung Life Insurance official. “It is too early to tell the specific details as to whether we will prepare a product similar to the Vitality program. We acknowledge that multinational insurers are active in developing and promoting such products, so we are trying to follow market trends and figure out what we can do as one of the biggest insurance companies in the country. ”

The introduction of app-based health management insurance products has become possible after the financial authority finally permitted the growing trend. The Financial Services Commission and the Financial Supervisory Service in November released a guideline that clarified a previous ban that kept life insurers in Korea from offering such products.

Previously the insurance business law was interpreted as banning any activities that were considered medical services.

“The guideline paved the way for insurers to offer a product aimed at incentivizing people to follow through with a healthier lifestyle. Previously, the government banned such products because they can be considered medical treatment. But as the regulator discussed this issue, they’ve reached an agreement that rewarding better health conditions is different from suggesting treatment or diagnosis,” said Cho Yong-woon, a research fellow at Korea Insurance Research Institute. “I believe that such programs have good business prospects because clients will find them attractive.”

The guideline still prohibits insurance companies from handing out wearable smart devices or other medical products like blood pressure readers.

Wearable smart devices have played a large part in making it possible for insurers to reward customers based on healthy living. The devices make it more accessible and convenient for users to track and record their activities and health in real time. With big data being used to analyze the records and a growing number of people becoming interested in managing their health data, financial companies have been rolling out health incentivized financial products.

So-called insurTech, a combination of insurance and technology, has quickly risen to prominence in the global financial industry.

According to a study by the Korea Insurance Research Institute, the insurTech market has been growing rapidly in recently years. Investment in insurTech start-ups, which amounted to $2.6 million in 2013, surged to $11.9 billion last year. While only 52 insurTech companies were acquired in 2013, that figure had doubled to 91 last year.

The United States is currently the most active market, with 75 percent of global investment. As of 2015 there are roughly 110 insurTech companies in the United States.

This new trend is expected to benefit not only users, whose health should improve, but also insurance companies, as healthier customers are likely to need to spend less on medical fees.

According to a report by the Swiss financial services company UBS released in September, the tech incorporated program could save the Asian insurance industry roughly $300 billion a year by 2025. With costs down, the report estimated that the overall profits of Asian insurers will increase by $55 billion annually.

The UBS report also noted that Asia will be a growing market, considering that while emerging Asian markets account for 43 percent of the global population, they only hold 13 percent of the world’s total premiums as of 2016.

“The rising influence of the millennial generation [those born between 1982 and 1998] is another positive driver for insurTech in Asia,” the UBS report noted. “According to Accenture, millennials account for more than 45 percent of the population in Asia Pacific and are projected to have $6 trillion in disposable income by 2020, more than any previous generation. Millennials are not only more comfortable with new technology, but they are also more willing to share personal information in exchange for convenience, financial incentives or more personal services, based on a study conducted by Columbia Business School and Aimia.”

The insurTech financial product is expected to particularly help the Korean life insurance industry as a new revenue source.

Although the Korean life insurance industry posted a net profit as of the third quarter, it was largely due to profits made from investments, which increased 4 percent to 17 trillion won, rather than insurance subscriptions.

Life insurance companies in the first nine months saw net profits grow 12.3 percent from the same period a year ago to 3.81 trillion won. However, the insurance operating loss saw an increase of 397.5 billion won to 15.5 trillion won.

Other Korean financial businesses have already been attracting clients with behavior-based programs, from offering higher interest rates for those that goes on diets or quit smoking to offering discounts on credit card spending when signing up for fitness centers or golf practices.

In January Woori Bank launched its WiBee Kook savings account, which allows clients to save as much as 300,000 won a month with a maximum annual interest rate at 2.4 percent. The account helps clients hit specific goals such as quitting smoking or losing weight.

Every time the user reaches their daily goal, 10,000 won is automatically transferred from their primary bank account to a savings account. If they fail to hit their target 5,000 won is deducted from the saving account and put back in the main account. According to the bank, over 71 percent of subscribers are women. The majority of users are in their 20s and 30s.

Shinhan Health Plus is also a savings account that was introduced in June last year. The bank offers the best interest rates to subscribers that meet their workout goals in Samsung Electronics’ health management app S Health. The subscriber can choose from either walking 100,000 steps or more for a year, recording daily meal consumption for 10 days or more, and recording sleeping patterns for more than 10 days.

The financial product is considered a major hit as more than 377,800 accounts were opened as of this month.

Card companies are also focusing on behavior. Hana’s 2X Gamma card offers a discount of up to 10 percent on credit card bills when users sign up for a gym or golf practice range and offers a discount when using hospitals, including oriental medicine.

Woori’s Wellrich 100 Gold card accumulates points when it’s used on leisure activities and sports, which can later be used as cash. Samsung Fire and Marine Insurance has partnered with U.S. health care company Aetna to develop integrated health care management for its clients since 2015.

“The agreement is to learn the U.S. company’s expertise and know-how,” said a Samsung Fire and Marine Insurance official. “Once we establish the system, we might better provide health-enhancing services, depending on each client’s disease and conditions.”

But while insurers and other financial institutions are rushing to join the tech-savvy trend, there have been rising concerns over the exposure of personal information.

“As for privacy and data protection, concerns could arise. But since the health data will only be used for amassing big data to reward clients, no major problem will take place. We also need to pay attention to what the regulators say about data collection and privacy protection, since the guidelines didn’t cover the data issue,” said Cho Yong-woon, a research fellow at Korea Insurance Research Institute.