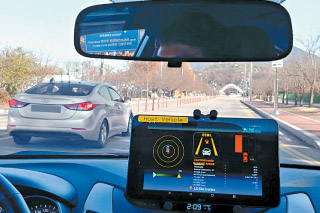 A tablet shows how LG Electronics’ V2X safety solution for autopilot safety works during a recent demonstration of the new technology. [LG ELECTRONICS]

LG Electronics said Sunday it recently succeeded in developing its own technologies that could greatly reduce traffic accidents in autopilot situations. LG hopes to see its solutions for connected cars become an industry standard in autonomous driving.

In a demonstration Sunday, LG showed that a vehicle with a tablet powered by the new technology was able to send a warning message to its driver about the car ahead of him suddenly braking. The tablet also displayed a warning message about a construction site ahead so the driver could make a detour. The warning message was even sent to the car behind the driver. When the driver did not stop the car after an initial warning, a second warning was issued.

The safety method is based on what is known as “vehicle-to-everything” technology, better known as V2X, which connects vehicles with other vehicles, vehicles with infrastructure, and vehicles with pedestrians on a long-term evolution (LTE) phone network, enabling communication among them. The connection over an LTE network means no extra infrastructure is needed for vehicles to communicate, even in remote or less developed areas.

The most crucial aspect of autopilot driving will be, needless to say, safety, and there are two major technologies available now: an advanced driver assistance system (ADAS) and V2X. LG said V2X has overcome some defects of ADAS, such as short detection distance and an inability to detect danger coming from cars that are not directly ahead or behind.

V2X is also able to relay information about the location, direction and velocity of vehicles up to several hundred meters away in real time using 360-degree situational awareness on the road. It’s also not affected by weather conditions like fog or heavy rain.

V2X sensors can be easily installed in existing cars and trucks. The country’s second-largest consumer electronics producer is increasingly betting on car parts for future growth. The V2X-based autopilot safety technology will eventually rely on the next-generation 5G connectivity, which is set to be up to five times faster than LTE networks.