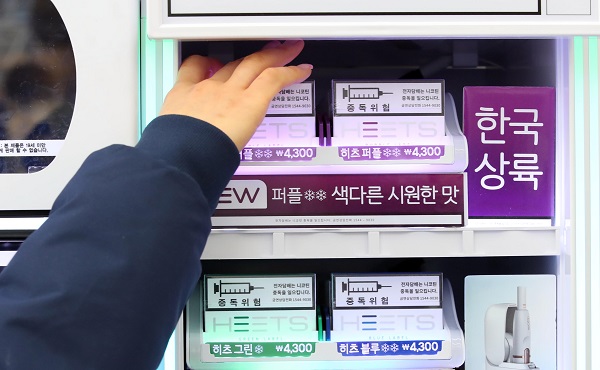 Caption: An employee at a convenience store in central Seoul organizes heat-not-burn cigarettes on the shelves. [YONHAP]

The price of refill packs of heat-not-burn cigarettes is likely to be around 5,000 won ($4.59) next year, as another bill to raise taxes on the products passed the National Assembly Friday afternoon.

The assembly passed a vote to hike local taxes by 532 won to 1,292 won. The bill will go into effect next month.

Last month, the assembly passed a bill to hike a special consumption tax on the e-cigarettes by 403 won to 529 won. The tax increase was applied starting from this month but has not yet affected prices.

Yet another bill is waiting for a vote later this month to raise special charges — for so-called “National Health Promotion” — from 438 won to 750 won, which industry sources say is highly likely to pass.

If next month’s bill goes through, the total amount of taxes imposed on local heat-not-burn cigarettes will rise to 2,986 won from 1,739 won earlier this year. That is around 90 percent of the taxes changed on conventional cigarettes, which is 3,323 won.

All three heat-not-burn cigarette refills in Korea—Philip Morris International’s IQOS, British American Tobacco’s glo and KT&G’s lil — have been selling for 4,300 won for a pack of 20 after domestic releases this year.

They are slightly cheaper than conventional cigarettes, most of which sell for 4,500 won. The tax hikes may make heat-not-burn cigarettes more expensive than conventional ones.
No manufacturers have revealed concrete plans of how much or when they will raise prices.

In the last few months, Philip Morris International and British American Tobacco have reacted to government tax hikes by saying they are internally discussing the matter. But KT&G — the last to join the bandwagon — said at lil’s launch event last month that it was not considering a price hike at all and is maintaining that stance.

Cigarette price hikes typically prompt smokers to stockpile supplies. Some retailers do, too, to make greater profits after the increase.
When the National Assembly agreed to increase the tax on heat-not-burn products on Aug. 22, sales of IQOS refills rose 61 percent at discount chain 7 Eleven compared to the previous week and 37 percent at Ministop.

The government wants to prevent retailers from stockpiling ahead of price increases.

In Nov. 9, the Ministry of Strategy and Finance announced that retailers will be fined up to 50 million won or sentenced to a maximum of two years in prison if they are found to have refused to sell heat-not-burn cigarette refills without a particular reason — presumably they would be stockpiling them for after the price hike — or if their monthly sales volume goes over 110 percent of the average volume from the previous three months.

Convenience stores — CU, GS25 and 7-Eleven — also launched last month a limit to the volume of heat-not-burn cigarettes franchise owners can order for their stores.