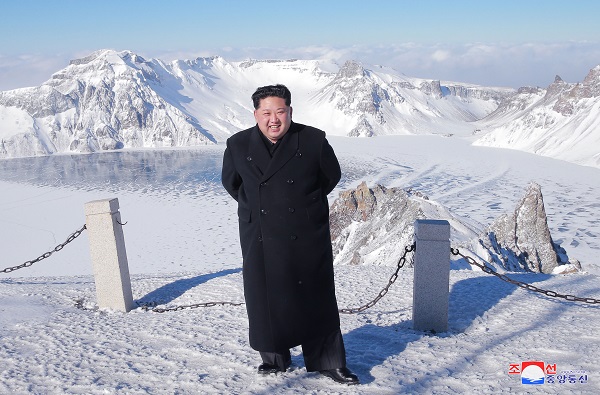 "Kim visited the mountain and ordered the site managers to construct hospitable accommodations on the mountain for visitors,” the state-run Korean Central News Agency (KCNA) reported on Saturday.

“[Kim Jong-un’s father] Kim Jong-il did the same, he visited the mountain right before announcing in 1974 his list of 10 social decorum [which includes the commandment that the people remain completely loyal to the head of the state],” said a South Korean government insider. “Kim also visited the mountain just before executing Kim Tong-kyu, then-senior official for international affairs, in 1977.

“Kim Jong-un is following in his father’s footsteps in visiting the mountain as times of important decisions regarding the state.”
It’s impossible to predict if the visit augers another nuclear or missile test, or an action of a completely different sort.

“Kim visited the Kumsusan Palace of the Sun [the mausoleum of his grandfather Kim Il Sung and Kim Jong-il] right after the Hwasong-14 missile launch on July 4,” said Yang Mu-jin, a professor of North-South relations at the University of North Korea Studies in central Seoul.

“So this visit to Mt. Paektu could also be a celebratory one for the successful launch of the Hwasong-15 missile on Nov. 29.”

“Kim has a lot on his plate, as next year is the 70th anniversary of the founding of the North Korean government,” said a South Korean government insider. “So he needs to deliver tangible results on the country’s politics, economy and diplomacy. So it is likely Kim thought through what he is going to present as his vision for next year during his visit to Mt. Paektu.”