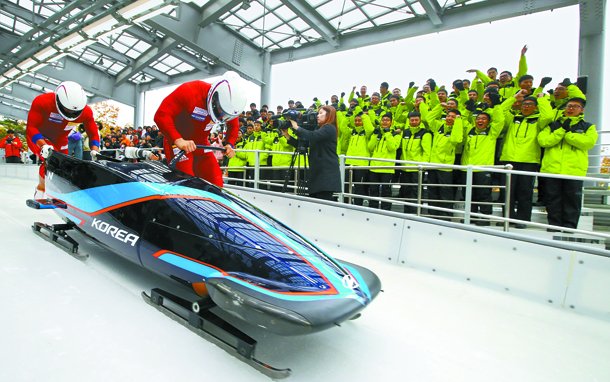 While Yun Sung-bin is dominating the BMW International Bobsleigh and Skeleton Federation (IBSF) World Cup in men’s skeleton, Korea’s two-man bobsled team - made up of pilot Won Yun-jong and brakeman Seo Young-woo - have made a change in their Olympic season. Rather than competing in IBSF World Cup events, the two will make the most out of their home court advantage in preparation for the 2018 PyeongChang Winter Olympics, and opt to train at the Alpensia Sliding Centre in Pyeongchang, Gangwon. 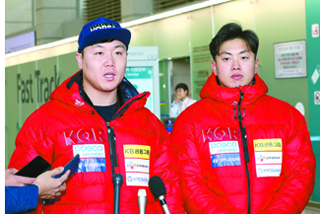 The team, who finished first in World Cup rankings during the 2015-16 season, returned to Korea on Dec. 5. With their return, there wasn’t any Korean team participating in the two-man or the four-man bobsled at the fourth IBSF World Cup in Winterberg, Germany on Saturday. The Korean bobsled team won’t compete at the next World Cup event in Innsbruck, Austria, as well.

Instead, they will train at Alpensia Sliding Centre starting today, in an attempt to take advantage of being the representatives from the host nation.

Originally, the plan was for Seo and Won to compete in the IBSF World Cup throughout November and December.

But their plan didn’t work out in their favor, as the team’s best finish was fifth at the third IBSF World Cup event in Whistler, Canada. Since it’s vital for the two to gain confidence for the Olympics, Lee Yong, head coach of the Korean bobsleigh and skeleton national team, decided that it would be best for the two to train at Alpensia instead of the World Cup.

Three of the four IBSF World Cup events this year have been won by racers from the country hosting the event. Throughout the bobsled events, racers who have used the track the most always had better result than others.

“Since that seems to be the case this season, I believed it is the biggest task as of now [for the two] to get used to the track,” Lee said. “Other than that, we don’t have any problems.”

But some feel that this sudden change of plans may be due to the team’s equipment. As much as experience of the track plays a role in success, the sport is very reliant on having quality equipment. It is vital for racers to find the sled and the runner that best fits them.

Still, the Korean bobsled team is undecided on which sled they will use during the Olympics - debating between a sled made by Hyundai Motors or the Latvian-made BTC sled, which they are more comfortable with. In the sled made by Hyundai Motors, the team has never finished in the top ten at international events. Using the BTC sled, Seo and Won managed to finish atop the BMW IBSF World Cup standings during the 2015-16 season.

“Next month, we’ll compare times at the Alpensia Sliding Centre and make our final decision about which sled to use at the PyeongChang Olympics,” Lee said.