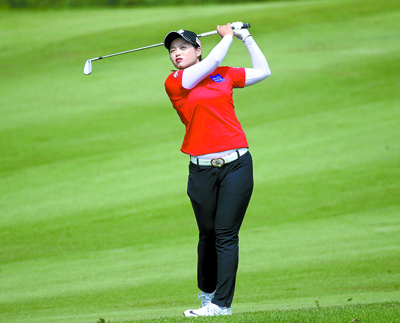 Choi Hye-jin watches her shot during the final round of the tournament. [KLPGA]

Choi Hye-jin had a come-from-behind victory to win the KLPGA Tour’s 2018 season opener at the Hyosung Championship with SBS at Twin Doves Golf Club in Vietnam on Sunday. 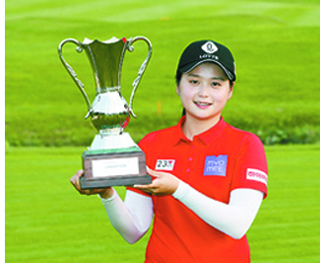 Choi Hye-jin holds the trophy after winning the HyoSung Championship with SBS at Twin Doves Golf Club on Sunday. [KLPGA]

It seemed as if the KLPGA Tour was going to have a foreign champion for the first time in 12 years. Since Parinda Phokan started the final round with a four-shot lead, it was very likely the 21-year-old Thai golfer would win the KLPGA Tour’s season opener.

For Phokan to make her way to that dream stage, she had to overcome the pressure of maintaining the lead in the final round.

But a double bogey on the 11th hole took away her chance of a KLPGA Tour victory. After a penalty for hitting her tee shot into the hazard, Phokan’s third shot hit the flag, but went past the green. Though Phokan had an average score of 66.5 until the second round, she finished the final round at four over par.

Up until the early 2000s, foreign players have easily won KLPGA tournaments, which they played under invitation. However, that is no longer the case. Aside from Koreans living overseas, Nomura Haru and Lydia Ko, no foreign player has won the KLPGA Tour event since Juli Inkster in 2005.

While Phokan struggled, Choi slowly made her way up the leaderboard, taking sole lead by making three consecutive birdies from the par-4 11th hole. Of the five birdies in the final round, two of them on the par-5 second hole and par-4 13th hole were chip-in birdies.

With five birdies and one bogey, Choi shot four under par, 68, to finish two shots ahead of runners-up Park Gyeol, Seo Yeun-jung and Lim Eun-bin. With a victory, Choi took home a winning prize of 140 million won ($128,758), as this was Choi’s first win as a professional.

“I didn’t have much expectation because I was five shots behind the leader,” Choi said. “It’s surprising that I made history as a rookie to win the season opener. Playing more comfortably today allowed me to play well. Two chip-in birdies were really big.”

Choi, who started golf in the third grade, has been a member of the Korean national team since 2014, and is only the second player to be on the national team for four consecutive years.

As a member of the national team, Choi played in four KLPGA Tour events under invitations, where she won twice and had one runner-up finish. Choi was the first player since Kim Hyo-joo in 2012 to win a KLPGA tournament as an amateur golfer, and when she won her second tournament, Choi became the first player since Lim Sun-wook in 1999 to win two KLPGA Tour events as an amateur.

Not only that, Choi left a strong impression on the LPGA Tour by finishing runner-up at the U.S. women’s Open in July, which she also played as an amateur. Given her success as an amateur, people had high expectations of Choi once she turned professional, but it took eight tournaments for her to pick up a win.

Though Choi started playing on the KLPGA Tour in 2017, she is still considered a rookie in the 2018 season, as she competed as a professional in the second half of the season. Due to this, she became the first rookie on the KLPGA Tour to win a season opener.

“I have high expectations in my rookie season, as it is my first season playing under full-seed,” Choi said. “I figured it out by playing five tournaments towards the end of the 2017 season so now, I’ll play in the 2018 season more aggressively.”