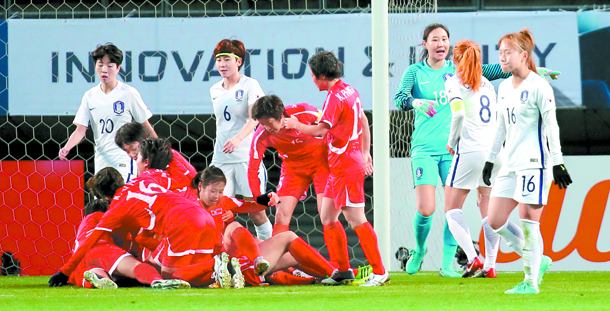 The South Korean women’s national football team, in white, reacts after allowing a goal to Kim Yun-mi in the 18th minute during the EAFF E-1 Football Championship at Soga Sports Park in Chiba, Japan on Monday. [YONHAP]

Kim Yun-mi scored the only goal of the match as North Korea collected their second straight victory at the East Asian Football Federation (EAFF) E-1 Football Championship at Soga Sports Park in Chiba.

The two losses mean South Korea can’t win the four-nation tournament. Yoon Duk-yeo’s side was looking to win the regional crown for the first time since 2005. They will try to close out the tournament on a high note against China on Friday, also in Chiba.

There were more than 300 North Korea fans gathered at the stadium on Monday, compared to about 10 people in the South Korean supporters section.

Neither team made any early threatening attempts on goal. Kim Yun-mi, who scored twice against China, broke the scoreless deadlock in the 18th minute, however, when she redirected a Ri Hyang-sim cross from the right wing with a header.

North Korea then got into their attacking rhythm, with Kim Pyong-hwa firing three shots in the 24th to 30th minutes, though all of her attempts went straight to goalkeeper Kim Jung-mi.

South Korea managed only one shot in the first half. Lee Min-a made a left-footed strike in the 32nd minute, but it was blocked by a North Korean defender.

To infuse their attack with some fresh energy, South Korea substituted Han Chae-rin for Jung Seol-bin, who has 19 goals in 63 caps, in the 78th. But the shift failed to produce meaningful opportunities. Instead, they almost gave up their second goal of the night in the 88th minute, when Wi Jong-sim fired with her left foot, forcing Kim Jung-mi to make a save.

The inter-Korean clash in Chiba was the 19th of its kind. It was also the first time since Feb. 29, 2016, that the two sides went head-to-head in Japan.

They had last faced each other in April this year. But at the time there were no South Korean fans, as the qualifying match for the 2018 Asian Football Confederation Women’s Asian Cup was held in Pyongyang.

With the latest result, the North Korean women improved their superior head-to-head record against South Korea to 15 wins, three draws and one loss.