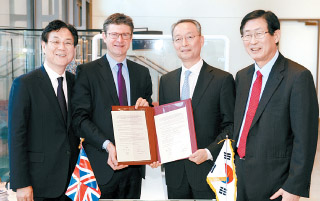 It is premature to pop the champagne cork. The $19 billion Moorside nuclear plant project in Britain is not yet in the bag. Korea Electric Power Corp. (Kepco) has been named a preferred bidder to take over a 100 percent stake in a company called NuGeneration, which was originally in charge of the project until the bankruptcy of Toshiba’s nuclear unit and the pullout of a French partner. We cannot be sure if Kepco will truly get the deal until a final contract is signed next spring. A rival Chinese bidder, General Nuclear, backed by an ambitious government in Bejing, won’t easily back down.

A nuclear reactor project can be won when it is backed by technology, marketing capabilities, and financing. Korea’s next-generation APR-1400 reactor earned international recognition for safety and cost efficiency in the birthplace of the first industrial revolution. Kepco and its nuclear operator unit, Korea Hydro & Nuclear Power Corporation (KHNP), invited the British energy minister and other government and industry experts to tour the reactors in Korea and their main builder, Doosan Heavy Industries, in Changwon, South Gyeongsang. The British, which were reportedly skeptical of Korea’s reactor technology, were taken aback by the sophistication of the country’s technological capabilities after seeing them with their own eyes.

But the tricky part still remains. Korea should be able to raise the financing needed for the project, which is supposed to be completed by 2028. There aren’t many states that can sell nuclear reactor technology abroad. Once Korean reactors go to a country like Britain, other states looking for next-generation replacements for aging generators could be persuaded that Korea is the place to look to. Thousands of jobs and a market of nearly 600 trillion won ($548 billion) could be ours.

Strangely, however, the Blue House and the Industry and Energy Ministries do not seem to be that thrilled about these prospects. Officials mumble that they won’t go into a business that could lose money. They pay heed to some skeptical views that Kepco would be picking up a debt mess from Toshiba. But they overlook the industry opinion that Westinghouse — the U.S. nuclear firm that Toshiba acquired in 2006 and became the source of the Japanese company’s woes — is far behind the Korean operator not only in construction technology but also in managing reactors. Toshiba’s weaknesses actually demonstrate Korea’s strengths.

Considering the lack of enthusiasm for the deal, it remains uncertain how much support the Export-Import Bank of Korea will put up for the project. The state bank is already short of funds after cleaning up and sustaining money-losing shipbuilders. No one in the Blue House or government appears to be pushing the bank to take leadership in the financing of the project. If the administration does not have the will, the legislature should some initiative to save the project. It must seek legislation of a special bill to support exports of nuclear reactors.

The Moon Jae-in administration, which nearly killed the deal by suspending the construction of the Shin Kori 5 and 6 nuclear plants — the first reactors running on the exported model APR-1400 — and by announcing plans to phase-out reactors, could at least have given warm congratulations to Kepco, which ran a good race to win the deal despite little support from home.

But on the same day Kepco was named the preferred bidder, its CEO Cho Hwan-eik announced that he was resigning before his term ends three months later. Cho could not return home — even when his mother was fatally ill — because he had to see the deal through. If Cho expressed resignation because he was tired, the Blue House at least should have had the decency to show respect for him and accept the resignation after giving him a week’s holiday. Soon after, KHNP CEO Lee Kwan-seop had his home and office raided by prosecutors. Lee served just a year of his three-year term. It is understandable that the ruling power is under pressure to reward campaign contributors with top seats at public institutions. But it is shameful that the incumbent government treats poorly those veterans in the reactor business, which is a priceless asset of Korean industry.