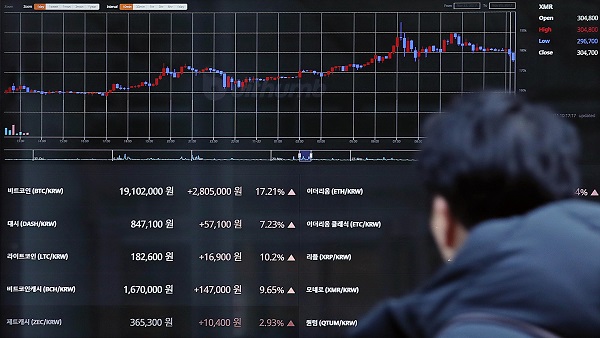 The price of bitcoin in Korea went on a wild rollercoaster ride over the weekend, losing as much as 40 percent in value at one point. Behind the convulsions were a number of factors triggering investor panic, including a scam perpetrated by a high school student.

The price swings were more violent in Korea than on other cryptocurrency markets in other countries.

According to Bithumb, the top cryptocurrency exchange in Korea, bitcoin was being traded at 19.85 million won ($18,262) on Thursday. On Friday, it soared as high as 24.81 million won, punching through the 20 million won threshold for the first time.

It took less than 12 hours for the value to fall low as 17.46 million won. By around noon on Sunday, its value has fallen to 13.99 million won, a 45 percent fall compared to the historic peak on Friday morning.

Bitcoin rebounded globally on Monday, with the global average price standing at around $16,500. In Korea, it traded at around 19.00 million won as of 2 p.m.

The sudden spike in prices globally from Thursday to Friday was due to heightened market expectations driven by the launch of bitcoin futures. The introduction of bitcoin futures by the Chicago Board Options Exchange, which started on Sunday local time, meant that cryptocurrencies, which have been considered outside the scope of mainstream finance, had finally become a part of a regulated financial market — at least in the U.S.

But the launch of bitcoin futures turned out to be a double-edged sword.

Investors can essentially bet on an incline or decline of bitcoin prices through futures, which means they have the option of short-selling, taking profit by betting against the cryptocurrency. With the launch of bitcoin futures imminent, concerns spread that institutional investors would choose to bet against bitcoin, which led to the fall in price.

Leading brokers also expressed worries prior to the launch of the futures.

The Futures Industry Association in the United States raised a red flag on bitcoin futures trading on Thursday local time in an open letter to Christopher Giancarlo, chairman of the U.S. Commodity Futures Trading Commission, saying that the process of certifying bitcoin futures as legitimate financial product lacked “proper public transparency and input.”

But the defining event for the Korean market this weekend was a media report that went viral Friday evening.

A local news outlet reported at around 7 p.m. that the government was mulling the possibility of banning the trading of cryptocurrencies completely in Korea, quoting a high-ranking government official as the source. The news, coupled with the government prohibiting the trading of bitcoin futures and putting the Ministry of Justice in charge of regulating cryptocurrency trading rather than the Financial Services Commission, triggering panic selling by punters in Korea.

The weekend frenzy in Korea made Bithumb the leading bitcoin trading platform in the world. As of 2 p.m. Monday, a total of $2.3 billion worth of bitcoins were being traded in the span of past 24 hours, nearly $400 million more than runner-up Bitifinex in Taiwan, considered the biggest exchange in the world. Coinone and Korbit, other leading platforms in Korea, were ranked fifth and sixth in the global bitcoin trading scene.

But the report that triggered the panic appeared to be false or exaggerated. According to government officials contacted by the JoongAng Ilbo, the banning of cryptocurrency trading is highly improbable.

“The Ministry of Justice is considering an all-out ban of bitcoin trading as an option but it needs a legal basis to do so,” said Choi Jong-ku, the chairman of the Financial Services Commission, said during a meeting with local reporters on Monday. “Given the highly uncertain future of bitcoin, it is also questionable whether straight [restriction] is appropriate.”

The Blue House is reportedly divided on how to handle the rise of cryptocurrencies. A senior official from the Blue House reportedly told the JoongAng Ilbo that the cryptocurrency phenomenon is two-sided — the fruit of an important new technology known as blockchain on the one hand and a stimulus of excessive speculative fever on the other.

“Given the debate in the government and inside the Blue House, we need a more comprehensive picture [before deciding on the policy direction],” said the Blue House official.

Trading became particularly feverish in Korea thanks to a scam by a local teenager late Saturday.

At around 11 p.m. on Saturday, a Twitter account named “Bitcoin Platinum” posted a feed saying that it found a “critical issue at syncing process” and “the fork will inevitably delayed to block no. 500,000.”

The message was referring to a so-called hard fork in the bitcoin mining process — how bitcoins are made — that was supposed took place on block 498,533, according to the Twitter account. A hard fork is a type of software upgrade that changes certain codes of the bitcoin protocol with the potential of ultimately creating two completely different coins. The Platinum hard fork, which was supposed to occur today, would have created another bitcoin derivative, distributed to bitcoin owners.

The tweet about a delay prompted many people to sell. After investigation, it was found that the operator of the Twitter account was a high school student in Korea and all the information described by “Bitcoin Platinum” was a scam to manipulate bitcoin prices.