Chinese start-ups want to be their own bosses

Chinese start-ups want to be their own bosses 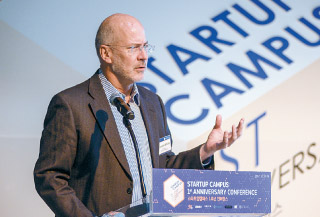 Despite Korea’s IT-savvy image, the country’s university graduates are not so keen to launch an IT start-up of their own. Only 2.8 percent admitted to such ambitions in a survey by the Korea Trade Association in August.

In contrast, the percentage of Chinese students that aspire to start-up success was a striking 89.8 percent in a survey last year.

China has rapidly climbed the start-up ladder in the last five years. According to CB Insights, 27 percent of all 215 unicorn companies worldwide are Chinese. The U.S. still has a dominant position, accounting for half of that pie, but China’s growth has been astonishing - four years ago, 75 percent of all global unicorns were American and China only had two.

Steven White, a professor at Tsinghua University’s School of Economics and Management since 2010, has been able to see that phenomenon up close. He is also an associate academic director for the university’s X-lab - an internal education center founded in 2013 that provides entrepreneurship education for Tsinghua’s students and alumni. More than 1,100 teams have been born from the program, among which 459 have been incorporated and 152 received investments worth $290 million in total.

“The desire to be your own boss is huge,” said White in an interview with the Korea JoongAng Daily. He visited Korea to give an opening lecture at the Asia Start-up Network Forum held between Nov. 27 and 28.

“This may be true anywhere, but in China in particular, because bosses can be very hard on you. So people want to be their own boss.”

White compared China to Japan, where he studied and worked for eight years. White said that while in Japan working for a big company is considered a better and safer choice, in China the urge to refuse working under someone else, combined with the nationwide adulation of start-up models like Jack Ma of Alibaba Group, has fueled entrepreneurial dreams among young people. They hope they too can succeed like Ma, who went from being a middle school English teacher to one of the world’s richest men.

The existence of a huge market of 1.4 billion people also makes it easier for a Chinese start-up to make money. However, White added that many Chinese start-ups are not making profits.

“Even among unicorns, I haven’t seen many that are actually turning a profit [and that’s] because the emphasis is not on profit, but scale-like how big are we, how many things do we produce, how many consumers do we have and what are our revenues,” he said.

One example White suggested was the bike sharing business, similar to Korea’s Ttareungyi. The business was so popular in China that 15 different companies offered the same service. After a shakeout, the game’s down to two: Mobike and Ofo which jointly account for 90 percent of the market. However, neither of them has reported significant profits.

White added that another reason money is flowing into start-ups in China is that it is one of the few remaining realms to make investments relatively untouched by government regulations. But Chinese companies have the tendency to overlook start-ups with technology in development and no commercial product, which hinders growth of start-ups with core technology and actual intellectual property that may have an enduring impact in society.

“The government wants start-up ideas that could help rural areas and those that focus on deeper technology based on innovation, but the system right now doesn’t really support those,” he said.

On the Chinese government’s drive to boost start-ups, White had a more balanced view calling it a “double-edged sword.” In 2014, the government called for “Mass Innovation and Entrepreneurship” and has offered support to investors and schools to invigorate start-ups.

“If you have a strong government that has a lot of its own resources, it does two things-it chooses which areas are important and funds them,” said White, referring to the 10 industrial sectors China announced in 2015 to focus on in the next decade, from aerospace equipment to robotics.

“The nice side of the sword would be that a lot of funding will go into those sectors because initiatives from the central government will flow down to city or provincial governments,” he explained. On the negative side, other realms will be relatively neglected and starved of funding and smart people.”