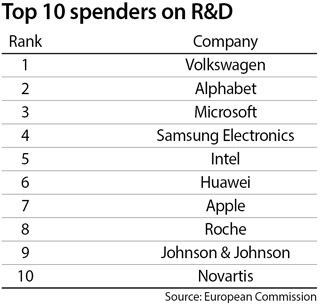 The only other Korean company to rank in the top 50 was LG Electronics at No. 50, down from No. 48 last year. Hyundai Motor ranked 77th, and SK Hynix, a manufacturer of computer chips, ranked 83rd.

The EU scoreboard is based on an analysis of 2,500 companies that invested the largest sum of money into R&D in 2016. Their total spending, 741.6 billion euros ($876.3 billion), represents about 90 percent of the world’s business investment in research and development.

The top spender was Volkswagen, which has remained in the same spot for fourth consecutive year, followed by Alphabet, the parent company of Google, and Microsoft.

After Samsung in fourth came Intel, Huawei, Apple and Roche.

Although Samsung, which had remained in the No. 2 spot for three years straight, fell to fourth, the company is expected to rebound next year after announcing a plan in July to spend 37 trillion won ($34 billion) on adding facilities for semiconductor and display production through 2021.

Samsung is currently the world’s second-largest manufacturer of semiconductors, which are used in computer processors and memory chips.

A separate study released last month by the Institute for Information and Communications Technology Promotion, a Korean government-funded think tank, indicated that Korea’s technology research relied heavily on Samsung, even when the country ranked fourth in the world in terms of R&D expenditure.

Of the 22.1 billion won that Korean companies spent on research and development last year, 57.3 percent came from Samsung.

On the EU scoreboard, American companies made up 39 percent of R&D spending, followed by Europeans with 26 percent, Japanese with 14 percent and Chinese with 8 percent.

“Companies located in countries other than China filed more than 50 percent of their patents in ICT-related technologies,” the report noted.

Such a high share is “partly due to the specialization of Korean companies, and Samsung in particular, which is by far the company with the highest number of patent families during the period considered.”

Companies’ total R&D investment increased by 5.8 percent over the previous year, the sixth consecutive year of significant increase, according to the report.

Chinese companies increased their R&D spending by 18.8 percent, compared to 7.2 percent for American companies and 7 percent for businesses in the EU.