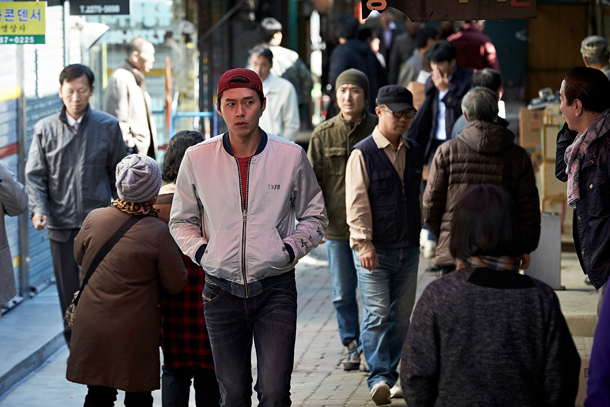 “The Swindlers” remained atop of the box office for its third consecutive weekend, but it is likely to be challenged next week with the release of blockbusters like “Steel Rain” and “Star Wars: the Last Jedi.” [SHOWBOX]

Many people in the movie industry largely attributed the domination of “The Swindlers” at the local box office two weeks ago to be luck, followed by the one-week delay of the college entrance exam, which coincidentally matched the crime film’s release date.

Its stellar performance, however, has proven not to be a fluke, as the film, starring Hyun Bin and Yoo Ji-tae, remained atop the box office for the third consecutive weekend.

Although its share of the total tickets sold has dropped each week, the film has still managed to stay strong amid new releases, like the highly-anticipated Japanese animated film “Mary and the Witch’s Flower” and the action flick “American Assassin.”

“The Swindlers,” centering on a con man and an ambitious prosecutor creating a team of con artists to track down an infamous swindler, sold 418,000 tickets from Friday to Sunday, making up 23.9 percent of the entire weekend ticket sales. Since its release on Nov. 22, it has sold a total of 3.72 million admissions.

Coming in at second was “Forgotten.” In its second weekend, the mystery thriller, starring Kang Ha-neul and Kim Moo-yul, sold 310,000 tickets over the three days, bring the movie’s total to 1.12 million tickets sold.

The third and the fourth spots were taken by newly-released animated features “Pororo, Dinosaur Island Adventure” and “Mary and the Witch’s Flower.” While “Pororo,” revolving around the popular penguin and his friends’ journey to save kidnapped dinosaurs on a dinosaur island, sold 298,000 tickets, “Mary,” about a girl who discovers a strange flower that gives her broomstick special powers, sold 267,000 admissions.

The Kenneth Branagh-directed murder mystery “Murder on the Orient Express,” adapted from the Agatha Christie novel, dropped two spots to round out the top five. It sold 144,000 tickets over the weekend, and has sold 773,000 admissions since its release on Nov. 29.

The box office is expected to be shaken up next week with the release of the local blockbuster “Steel Rain” and the latest installment of the Star Wars series “Star Wars: the Last Jedi.”