Lindblom has messy breakup with Giants, jumps into bed with Bears

Lindblom has messy breakup with Giants, jumps into bed with Bears

The Lotte Giants and ace pitcher Josh Lindblom acrimoniously parted ways on Monday after contract negotiations broke down. Lindblom took to Twitter to express his frustration, releasing a statement in both Korean and English that thanked the fans for their support and attacked the team’s management for their dishonesty and unprofessionalism throughout the negotiation process. 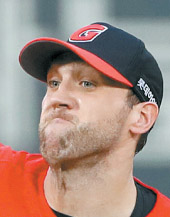 Lindblom made his KBO debut with the Giants in 2015. In his first season he picked up 13 wins and 11 losses with a 3.56 ERA. In his second season Lindblom picked up ten wins and 13 losses with a 5.28 ERA. Due to his daughter’s health he had to return to the United States at the end of the 2016 season, but he returned in July this year as a replacement.

In 12 games during the second half of the season, Lindblom picked up five wins and three losses with a 3.72 ERA, leading the Giants to the playoffs for the first time in five years. In two playoff games against the NC Dinos, Lindblom picked up a win with a 1.93 ERA.

“The reason for my free agent request had nothing to do with Monroe or money,” Lindblom said in a statement. “There had been stories about me, all of which contain very little truth. Our family has had to endure this until it became necessary for us to move beyond this situation.”

According to Lindblom, the club never actually asked him about Monroe, who has been diagnosed with a heart defect. Despite this, he says, the team continued to talk about her publicly, fueling speculation that the family may have to return to the United States.

“This crossed the line,” Lindblom said in a statement. “The team has not contacted me, even to this day, about Monroe’s health during the negotiation process. If they had inquired about Monroe’s health, they would have been informed that her doctors cleared her to travel to Korea for the 2018 season.”

When Lindblom returned to the Giants in July, his contract included the stipulation that he would have Free Agent status by Dec. 1. As a result, the club kept him on the hold off list, which prevented him talking to other teams, until Nov. 30.

“We had to leave some room for negotiation since he’s our player until Nov. 30,” said the Giants.

While technically the Giants did not break any rules by holding Lindblom until the end of November, the pitcher felt mistreated as the club didn’t properly communicate what they were doing or hold any substantial negotiations with him.

Since most foreign players leave Korea at the end of the season, most contracts are negotiated through email. Originally, the Giants offered Lindblom less money that he earned in 2015. While the Giants may have seen this as the first step in the negotiating process, from the players’ perspective the low offer suggests the team is not really interested.

Although Lindblom and the have parted ways, the pitcher will not be leaving Korea. On Monday afternoon the Doosan Bears officially announced that they had signed Lindblom at $1.45 million. The announcement means that the Bears are parting way with franchise star Dustin Nippert, the most successful foreign player the KBO has ever seen.

Nippert had been with the Bears since 2011, where he recorded a 2.55 ERA from 29 games. After a disappointing 2015 season, Nippert made quite a comeback in the following year, picking up 22 wins while losing only three games in 167 and two thirds innings.

Nippert threw eight shutout innings to help the Bears defeat the NC Dinos in the Korean Series. From a successful 2016 season, Nippert won the MVP award and became the highest-earning foreign player in the KBO, signing another year with the Bears at $2.1 million.

However, the 2017 season was quite a disappointment, as Nippert had 14 wins and eight losses in 30 games with a 4.06 ERA. After this lackluster performance, Nippert’s future began to look uncertain. Due to KBO regulations, the Bears would have had to offer him 75 percent of his previous year’s contract - a bitter pill to swallow after last season’s performance.

Nippert may not be finished with Korea yet, as the Giants, Dinos, KT Wiz and Samsung Lions all have foreign pitcher spots open. The LG Twins also still have spots open, although they are in talks to retain their two existing pitchers.

BY AN HEE-SOO, PARK SO-YOUNG [kang.yoorim@joongang.co.kr]