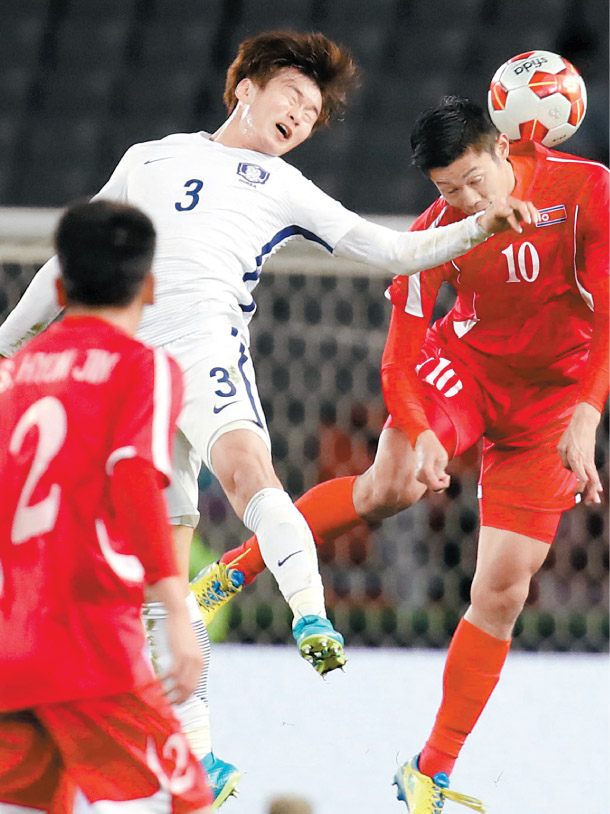 South Korea’s Kim Jin-soo, in white, competes for a ball in the air against An Byong-jun, third from left, during the EAFF E-1 Football Championship at Ajinomoto Stadium in Tokyo on Tuesday. [YONHAP]

North Korean defender Ri Yong-chol committed an own goal in the second half as South Korea collected their first victory at the East Asian Football Federation (EAFF) E-1 Football Championship at Ajinomoto Stadium in Tokyo.

South Korea, defending champions of this biennial event, were held to a 2-2 draw by China in their opening match on Saturday, while North Korea fell 1-0 to hosts Japan on the same day.

This was their first meeting since the 2015 tournament in Wuhan, China, where the two Koreas played to a scoreless draw.

With the latest victory, South Koreans also avenged their defeat in the women’s competition the previous day, when North Korea beat South Korea 1-0 in the women’s E-1 Championship contest at Soga Sports Park in Chiba, Japan.

Against the North in Tokyo, the South came up with a 3-4-3 formation, a big change from their previous 4-4-2 system, with two players, Jin Seong-uk and Jung Seung-hyun, making their international debut.

But South Korea couldn’t produce much with the back three and new faces early in the match. Their first strike came in the 21st minute when Kim Min-woo’s left-footed attempt was blocked by a defender.

North Korea, coached by Norwegian Jorn Andersen, also didn’t make a serious threat in the first half on South Korean goalkeeper Jo Hyeon-woo, who was making only his second international start.

South Korea created a couple of promising chances later with Lee Chang-min’s right-footed strike in the 29th and Jin Seong-uk’s volley off Go Yo-han’s cross in the 37th, but both attempts went wide of the net.

Early in the second half, South Korea delivered two shots on target. Jin made a header off Kim Jin-soo’s cross in the 48th, followed by Lee Chang-min’s left-footed effort one minute later that went straight to North Korean goalkeeper Ri Myong-guk.

Jin had another chance to score in the 57th, but his left-footed effort off Kim Min-woo’s cross hit the post.

South Korea finally went ahead in the 64th thanks to Ri Yong-chol, who put the ball into his own net after he failed to clear a Kim Min-woo cross from the left flank.

North Korea fought back in the 72nd, but Jong Il-hwan’s close-range strike deep in the box went wide.

North Korea then started to play more forwards to get an equalizer. In the 73rd, they substituted defender Pak Myong-son for forward An Byong-jun, and in the 88th, North Korea made another substitution, replacing defender Ri Un-chol with forward Jang Ok-chol.

North Korea, however, failed to unlock the South Korean defense during three minutes of added time.

South Korea will next face host Japan on Saturday to try to secure their second straight East Asian title. North Korea can’t win the tournament since they’re down with two losses, but will try to collect their first win of the tournament against China on the same day.