Bring back the bad cop

Bring back the bad cop 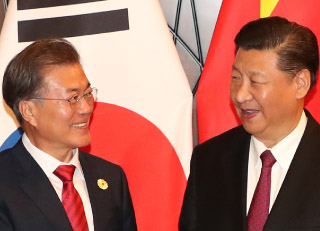 President Moon Jae-in meets China’s President Xi Jinping on Nov. 11 on the sidelines of an APEC summit in Vietnam. [YONHAP]

After President Moon Jae-in took office in May, some people advised him to send a special envoy to North Korea in June and seek summit talks with the United States in September. But Moon thought it was better to hold summit talks with South Korea’s main ally first. Moon Chung-in, the president’s special adviser on unification, foreign and security affairs, headed to Washington to deliver the president’s message.

There, the special envoy made a bombshell comment, suggesting that Seoul and Washington could consider a scaling down of joint military exercises if Pyongyang stopped provocations. His remark was strategically in tune with Beijing’s view. The envoy played the bad cop role ahead of the first summit between the new leaders of Seoul and Washington and set the stage for President Moon to play the good cop later by clearing up a supposed misunderstanding. It was a well-coordinated act.

Moon embarks on his first visit to Beijing today. But strangely, there is no such coordinated strategy of balanced messaging. Instead, everyone is walking on eggshells so as not to annoy or upset Beijing.

Lee Hae-chan, a heavyweight politician of the ruling Democratic Party, said that Moon and Chinese President Xi Jinping share the same approach to North Korea, suggesting that Seoul agrees to the China-proposed solution of denuclearizing North Korea in exchange for a peace treaty between Washington and Pyongyang. But does the Chinese view really meet our interests?

First of all, joint military drills cannot be bargained away. Our drills are legitimate defense maneuvers, while North Korea’s provocations go against international regulations. Second, peace negotiations are unthinkable when North Korea threatens the South and the rest of the world with intercontinental ballistic missiles. A peace treaty would also be linked to a pull-out of U.S. troops from South Korea, which would entirely destabilize the Seoul-Washington alliance. The Blue House took Lee’s comment lightly and said it was his personal opinion. Lee has not been reprimanded for his controversial remarks. Instead, he will be accompanying Moon on his trip to Beijing.

Then there is the question of whether we have any strategy in regards to China. The financial toll from its year of economic retaliations for Seoul’s decision to deploy the U.S. antimissile system Terminal High Altitude Area Defense (Thaad) in Korea is estimated to surpass 20 trillion won ($18 billion). Seoul agreed to the so-called three nos — no additional Thaad deployments, no joining of a broader U.S. missile defense system, and no Korea-U.S.-Japan military alliance — in return for normalizing ties — and without getting any hint of an apology from China.

Ahead of Moon’s visit to China, someone in the government should have said that China must apologize for its uncivil actions or that Seoul cannot agree to Beijing’s way of addressing the North Korea nuclear problem unless it makes its own effort to stop oil supplies to North Korea. We must be able to speak our mind to make the other party listen to us and respect our position. But nobody wants to play the bad cop role — no one from the Blue House, the Foreign Ministry or even any politician. Why are they acting so small and burying their heads in the sand when it comes to Beijing?

It is no wonder Beijing remains so high-handed. It went so far as demanding putting China’s opposition to Thaad in a joint statement after the summit. It should be us making Beijing apologize for its actions, not the other way around. U.S. President Theodore Roosevelt looked down on Koreans because they did not stand up for themselves. He refused to help Korea and stop Japan’s annexation of Korea, saying that friendship should be made among those who had the strength to defend oneself. Today’s U.S. President Donald Trump may be thinking the same thing.

Moon has a lot on his shoulders. He repeatedly told Trump during his visit to Seoul that his government was born through a civil protest against the former president. Therefore, he cannot ignore public demands. He put off the Thaad deployment temporarily on the same grounds.

If so, he must tell the same thing to Chinese President Xi — that his people are outraged by China’s economic retaliations — and bluntly ask its position on the anger. Moon must show China that we have a leader who stands up for his country.