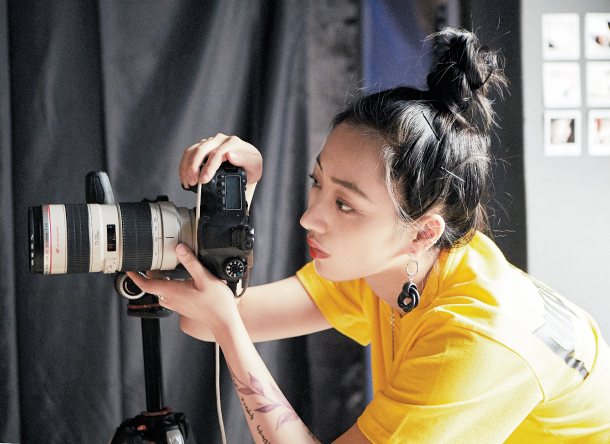 Believing everyone has their own color, photographer Kim Si-hyun brings out the most in her subjects by using unique colors in the background of portraits. She plans to open an exhibition in March with her “1,000-people-portrait” project. [SIHYUNHADA]

When you think of an ID picture, what comes to mind? Many Koreans would recall awkward smiles in front of red or white backgrounds that are usually used for ID cards or passports.

Until 24-year-old photographer Kim Si-hyun and her brand Si-hyunhada emerged, people didn’t give too much thought to ID pictures.

But after seeing her work, people have started to think that an ID photo is more than just a picture. It is a chance to represent yourself.

Believing that everyone has their own color, the photographer tries to capture a person’s essence in a single picture by using colors in the background of each portrait.

Kim launched a portrait photography business in October 2016, and she began uploading some of her photos to Instagram a month later. Over the past year, she has accumulated 163,000 followers thanks to her creative approach to portraiture. Through word-of-mouth she started to receive more requests from people who were willing to pay to have their photo taken.

She is currently wrapping up her “1,000-people-portrait” project, which she plans to exhibit in March. 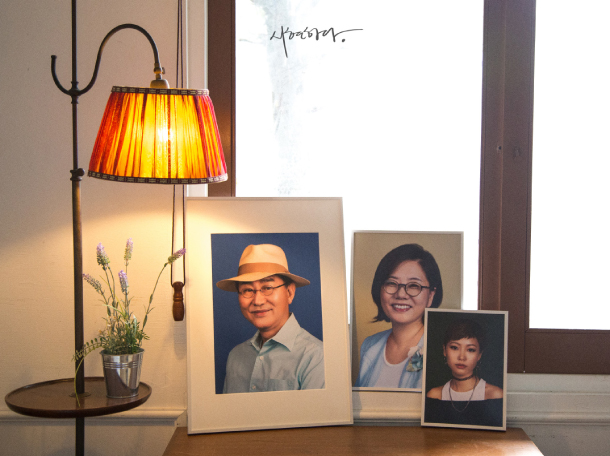 Above is a family picture taken at Sihyunhada. Kim Si-hyun believes that the definition of family has been extended from the typical four-member-family, so she thought to put each family member’s individual pictures together and call it a family photo. [SIHYUNHADA]

Q. When did you first get interested in photography?

A. When I was young, I had to move schools often, and my camera and taking pictures allowed me to befriend new people at each school I went to. I used Photoshop to embellish their faces. I began to think that I could take photos for a living after realizing that taking pictures and correcting them was never boring to me, no matter how many photos I took. Since I was an only child, I never had to share the computer at home. I even learned how to use Photoshop by myself.

Do you also draw pictures by hand?

Because I was good at Photoshop, I went to art academy when I was young, with dream of being a web designer. I liked drawing faces, but the teacher at that time told my parents that I lack in creativity. I was hurt to hear that, and I ended up quitting the academy. However, that didn’t stop me from continuing to draw. I often volunteered at flea markets or school festivals drawing caricatures.

I am currently taking a break from school after finishing my first semester of my junior year. At first, I started this “1,000-people-portrait” project because I want to take pictures for living. But now I am thinking whether or not I should still go back to school. I believe many people found me because they like my photos, not because I am a student of certain university. And especially in my major, we don’t learn how to correct pictures, but how to take good pictures. There is quite a wide range of photography, and they don’t offer classes that specifically relate to retouching faces.

The background color should be picked by the customers, but if they don’t have a specific color in mind, do you help them choose?

I think the time one puts into thinking about which color represents them is valuable. But for those who can’t choose one, I sit with them and talk to them for a while. Then, I suggest some colors, explaining certain adjectives that are associated with certain colors. If the customer chooses the color, then I correct the tone of the face to go along with the color.

Which color represents you?

I think it is black. I used to wear thick make-up because I am young and wanted to look strong and powerful, and didn’t want anyone to look down on me. But now I like black because it is neat and is appropriate everywhere. As the time goes on, I have begun to think that there is no color that is not pretty.

Have there been any especially memorable people who have come in to get their photo taken?

Many people actually come to mind, but especially those with disabilities are deep in my memory. I think those with exceptional appearances would look good in any picture taken at any photo studio, but for people with crossed eyes, for example, or facial paralysis, it is different.

These people have come to me and have confessed that they have never taken pictures that they truly like because they were too afraid to talk to the photographers. After hearing their stories, I became determined and hoped that I could be like a plastic surgery clinic that helps restoring the faces of sick people instead of merely making them more beautiful.

Have you ever taken pictures of your own family? Did they like it?

Since I was young, I have really wanted to take good pictures of my family. I started with people my age because I thought I could empathize with them best. In the past, I took a picture of my eight-year-old brother - who is 17 years younger than me - touched it up a little and then showed it to my friends. Their reaction was different from what I thought. They were astonished to find my brother is just a first grader because he looked like a sixth grader in the picture. I did my best at polishing my brother’s face, but I touched it up way more than I should have, which changed his overall atmosphere as a young boy. Then I realized that I wasn’t able to fully understand my brother. When I took photos of my parents, they didn’t really like it either. I think it is because I wasn’t able to fully understand what my mom wants. For instance, I thought I should soften her eye wrinkles, but my mom refused because she thinks she looks more natural with it. I haven’t gone through what they have gone through, so maybe I can’t understand them well.

Even when taking a family picture, you take each person’s picture individually and then put them together, right?

I was thinking how should I interpret the meaning of family, and I ended up deciding to take separate pictures of every family member and simply put them together in one place. The definition of family has been extended and people often refer to their close friends as family, even if they are not biologically related. So I thought, “What about putting each person’s pictures together when they live together, and maybe separate the pictures when they are not together?”

For now, I am preparing for the exhibition of the 1,000-people project. To be honest, my goal of taking pictures of 1,000 people has become a reality now, and I am a bit worried. For instance, say a frame for one picture costs about 20,000 won ($18.31), and I have to make one thousand frames, and I don’t have that much money because I am just a beginner - what do I do?