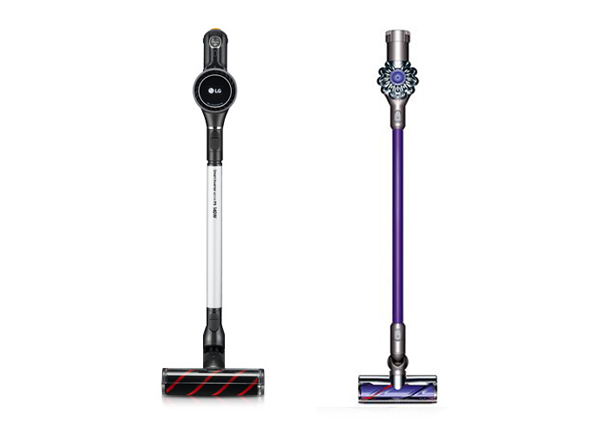 Dyson and LG Electronics met in court last week, kicking off their third legal feud over cordless vacuum cleaners after the British electronics manufacturer filed an injunction against the ads for LG’s Code Zero A9.

The Seoul Central District Court held the first hearing between the two companies last Friday after Dyson filed a provisional injunction last month to halt television, print and online advertisements of LG’s most recent vacuum cleaner, the Code Zero A9, saying some of the expressions used were overtly exaggerative.

The device is described to have a “Sucking power of 140 watts” and “Invertor motor speed at 115,000 revolutions per minute.” Dyson claims this information is a misrepresentation of the facts.

LG Electronics rebutted the claims. “The allegations are but claims from Dyson,” said a company source. “Code Zero A9’s functions [and the terms used in the ads] were tested and verified by an external research institute.”

Released in mid-June this year, LG Electronics’ Code Zero A9 has made waves in the premium cordless vacuum market. LG has produced cordless products before, but this new model was most similar to market leader Dyson’s in that the motor was located at the upper end of the handle.

The Code Zero A9’s success this year boosted LG to account for nearly 40 percent of the cordless vacuum market, cutting Dyson’s share to 50 percent, according to industry estimates. Dyson dominated the market since its entrance in 2008.

LG’s recent success is fueling rumors that Dyson’s take on the Code Zero A9 advertisements is a move to secure its position in the competitive domestic market.

LG Electronics and Dyson have met in court before due to disputes over cordless vacuum cleaners, but this is the first time that Dyson has initiated the process.

The first incident took place in 2015 when LG Electronics requested an injunction in Australian federal court to stop the Dyson V6 advertisement, claiming it misleads consumers. Phrases that LG claimed were problematic were also related to the device’s functions, like “most powerful” and “twice the suction power of any cordless vacuum.” The local electronics maker said the information on the ads was false, as LG’s Code Zero Cyking at the time had twice the sucking power of Dyson V6, at 200 watts versus 100 watts.

The second incident took place in Korea in February 2016, when Dyson invited bloggers and the local press to a session where it conducted a comparison of its cordless vacuum cleaners and that of competitors, including LG Electronics. Dyson covered the logos of rival models at the event, but LG accused the British company of business obstruction and violation of the fair trade law.

Ultimately both cases were resolved outside of the courts. Dyson agreed to pull down the offending ads and promised not to hold a similar event again.

Statistics show that the market for cordless vacuums is growing fast. According to research firm GFK Korea, sales grew 70.7 percent year on year between January and June this year. In October, sales of cordless vacuums on e-commerce site Danawa surpassed corded vacuums for the first time since the company started selling them in 2010.

However, Dyson’s struggle to secure its market share is likely to get even harder as domestic companies upgrade their products. In September, Samsung Electronics joined the cordless vacuum war with the Power Gun.