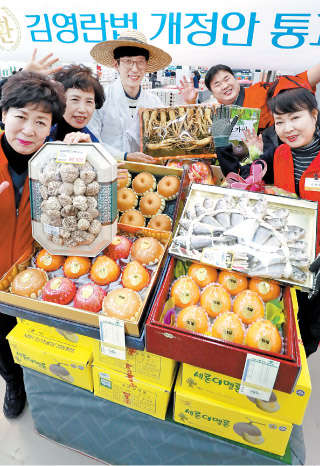 Employees at Hanaro Mart’s Yangjae branch in Seocho District, southern Seoul, pose with the discount chain’s gift sets on Tuesday. A banner above the stall reads, “Welcoming the reform of the Kim Young-ran anti-graft law.” Farmers and fruit retailers were upbeat after limits on agricultural gifts were lifted on Monday from 50,000 won ($46) to 100,000 won. [YONHAP]