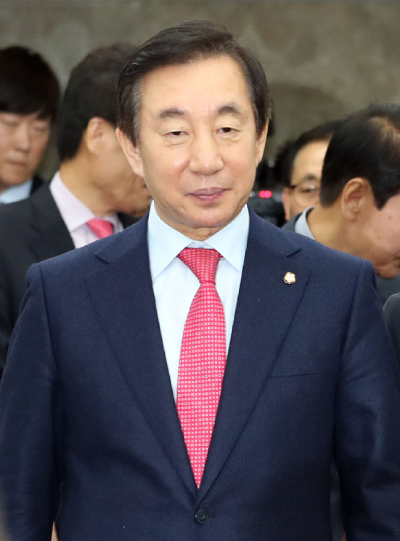 Three candidates from the main factions of the party ran to represent the largest conservative party with 116 lawmakers. Reps. Kim, Hong Moon-jong and Han Sun-kyo were the contenders for the floor leader race. Rep. Ham Jin-gyu, Kim’s running mate, will serve as the chief policymaker.

The new floor leader will work with the party leadership to form and implement strategies for the June local election. He will also be tasked to command the largest opposition party in the upcoming legislative war over a series of contentious bills.

The Liberty Korea Party has been resisting reform plans of the Moon Jae-in administration, including a plan to establish a new investigative body for senior public officials and a plan to reduce the National Intelligence Service’s investigative power. It is also promoting laws friendly to large businesses.

With Kim’s victory, Hong Joon-pyo’s control over the conservative opposition party will be further consolidated. Elected in July as the chairman, Hong has kicked out former President Park Geun-hye from the party and brought back Bareun Party lawmakers to expand his influence.

Kim managed to defeat two four-term lawmakers who used to represent the elite establishment of the party.

Hong Moon-jong chose Rep. Lee Chae-ik as the running mate to promote unity and reconciliation. Han’s running mate was Rep. Lee Ju-young and the duo pledged to end factionalism in the party.

The Liberty Korea Party held a joint debate at 4 p.m. at the National Assembly and listened to the candidates’ presentations. The LKP lawmakers cast ballots afterward to select the new floor leader. Of its 116 lawmakers, 113 were eligible to participate in the election, as voting rights of three lawmakers were suspended as internal disciplinary measures.

Speculations were high that floating votes would decide the outcome, as no candidate or faction overwhelmingly dominates the party. Floating voters are about a half of the lawmakers, observers said.