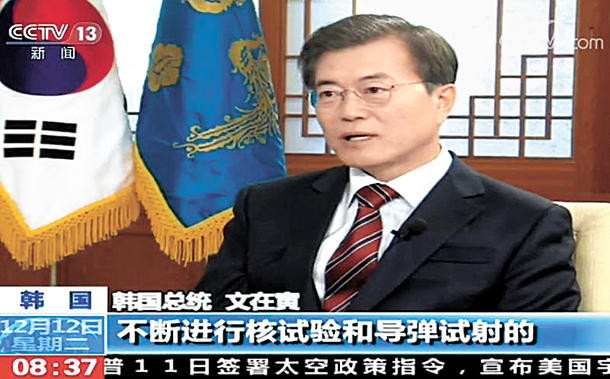 President Moon Jae-in made a last-ditch effort Monday to settle a diplomatic row with China over Korea’s decision to host a U.S. antimissile system, asking Beijing to walk a mile in Seoul’s shoes to understand its position.

“Korea and China each has a different position on the Thaad [Terminal High Altitude Area Defense antimissile system] issue,” Moon said in an interview aired by China’s state-run CCTV on Monday night. “We need to use the wisdom to walk a mile in each other’s shoes and take time to address a problem that cannot be resolved instantly.”

The 30-minute interview, conducted on Friday at the Blue House, was aired Monday night, ahead of Moon’s state visit to China on Wednesday. Moon is scheduled to meet with Chinese President Xi Jinping on Thursday.

Of the eight questions asked by CCTV, three were focused on the Thaad deployment, which put Korea-China relations into a tailspin over the past year. Although the Moon administration stressed that the measure was “temporary” to counter nuclear and missile threats from North Korea, China carried out a year of unofficial economic retaliations on Korean companies, artists and products. Beijing said Thaad’s powerful radar can spy on Chinese territory.

Efforts to right the relationship were made over the past months and the foreign ministries of Seoul and Beijing announced on Oct. 31 that the two countries agreed to normalize exchanges and cooperation in all areas. Beijing, however, continues to harp on the Thaad issue, while Seoul insists the matter was settled.

“Xi and I already upheld the agreement during our second summit in Vietnam [in November] and agreed to open a new era between the two countries,” Moon said in the interview. “At the time, Xi talked about a new beginning for bilateral relations and I totally agreed. I hope the two countries will overcome suffering from the Thaad dispute and open together an era of new advancement.”

Moon also stressed that it was unavoidable for Korea to allow the deployment to counter the North’s threats and gave another assurance that China’s national security will not be harmed by the advanced radar of the Thaad system.

“Korea introduced the system to defend the country, and there was never an intention to harm China’s security interests,” Moon said. “But we also need to put ourselves in China’s shoes to understand China’s concerns regarding the Thaad’s radar capability and possible infringement into its national security.

“Korea will be particularly cautious to prevent any infringement on China’s security interests,” Moon said. “I want to tell you that the United States also made several assurances on this matter.”

Before the October agreement was announced, Korea’s Foreign Minister Kang Kyung-wha said before the National Assembly that Korea has no plans to deploy additional Thaad systems, to participate in a U.S.-led missile defense regime or to form a trilateral military alliance with the United States and Japan.

While the so-called “three no” policy was not formally stipulated in the agreement with China, it is considered Seoul’s concession to Beijing to restore relations.

During the interview, CCTV anchor Shui Junyi asked Moon to “tell the Korean government’s position to Chinese viewers before our camera,” but Moon avoided giving a direct answer. “Korea already made public its stance on the Thaad,” Moon said, adding that the position is not new, but a longstanding stance.

“I believe the Oct. 31 agreement was about a mutual understanding about the position,” he said. “So, I believe the two countries need to open a new era for the next 25 years in economic, cultural, political, security, human exchanges and tourism areas, while resolving the Thaad issue separately.”

An interview with CCTV is traditionally planned with the Publicity Department of the Communist Party of China. Taking into account the broadcaster’s approach to the Thaad issue in the interview, Moon is expected to face pressure from Xi in the upcoming summit to reconfirm the “three no” policy and more concrete measures to ease China’s concerns.

The Blue House already said no joint statement will be issued after the summit and Moon and Xi will not address the media in a joint press conference, an admission that tough talks are expected.