Lee Jung-hwan is by far the best golfer the KPGA Tour has produced this season. With his first KPGA Tour victory at Caido Golden V1 Open and a runner-up finish in the KPGA Tour’s Genesis Player of the Year point standing, this was a turning point in his career. 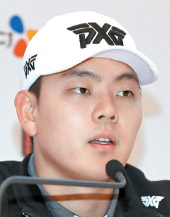 “After the qualifying tournaments by the end of the 2016 season, I signed up to be a public service worker [in military service],” Lee said. “Since military service is a must, I didn’t touch my golf clubs until January.”

However, due to the record number of registrants, Lee was given no choice but to play another season of golf. Within two months, Lee signed up three times to serve his time as a public service worker.

“Later I found out that they had the highest number that year,” Lee said. “That’s why my application didn’t get accepted. I kind of had to play the 2017 season. I tried to stay positive by telling myself that good things are about to happen.”

Just as he told himself, 2017 turned out to be all positives for Lee. After a runner-up finish in the second tournament of the season, Lee had quite a number of top ten finishes, but in June he met Kim Seung-hyuk in sudden-death playoffs in back-to-back weeks.

“Unlike the match play at Caido Golden V1 Open, I was leading,” Lee said. “From Kim Seung-hyuk’s last-minute chase, we got to the sudden-death playoff and I knew that it would have left a significant impact on me if I lost again. So I was a lot more nervous than in the match play. I could feel my putting stroke shaking.”

It’s not rare in golf for the same golfers to meet in sudden-death playoffs for two consecutive weeks, or even throughout the season, and during those two weeks, he worked well with his brother.

Though he lost the first playoff, within a week, Lee successfully redeemed himself, winning his first KPGA tournament at the Caido Golden V1 Open.

“After making my brother carry my golf bag [by making him quit his part-time job], I finished first, second, third, fourth and fifth,” Lee said. “It was an amazing experience. My brother didn’t know much about golf, but it made me feel a lot more comfortable. Since I had to make the decisions by myself, [having my brother as my caddie] allowed me to trust my shots more.”

“It’s an unbelievable result for a player who made his way up from the qualifying tournament to second in the Player of the Year point standing,” Lee said. “I think I was able to shoot in the 60s by minimizing my mistakes and knowing my distances for iron shots.”

Lee himself believes that 2017 was his most successful season since his KPGA Tour debut in 2010. Prior to this, Lee’s best finish was in 2012, when he finished 28th in the Genesis Player of the Year standing with a 71.56 scoring average.