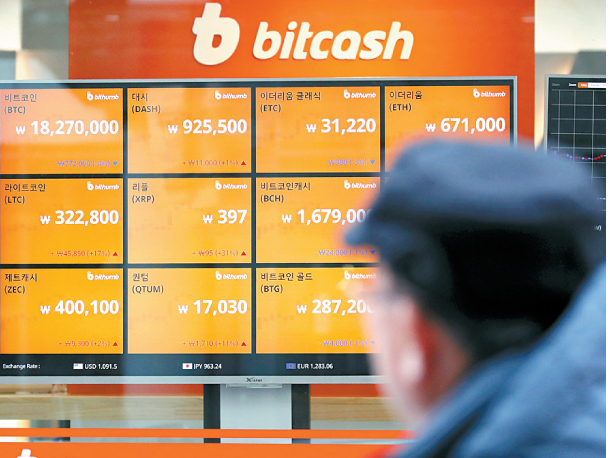 Screens at a cryptocurrency exchange in central Seoul show the prices of different cryptocurrencies on Wednesday. [YONHAP]

The Korean government will prohibit minors and foreigners from trading cryptocurrencies in Korea and restrict financial institutions from trading and investing in the relatively new form of asset as scams mushroom and rumors fuel wild price gyrations.

The government convened an emergency meeting Wednesday at the Seoul government complex in Gwanghwamun, central Seoul. The meeting was overseen by Hong Nam-ki, the minister of government policy coordination, to discuss a policy framework for cryptocurrency trading in Korea.

Wednesday’s meeting was the latest effort by the government to come to grips with a mania for cryptocurrencies in Korea and to try to protect local investors amid rising fears of a crash.

For a start, Korean minors will be forbidden from trading cryptocurrency entirely. They will be barred from creating accounts necessary to trade at the local exchanges as well.

This comes a few days after a scam perpetrated by a Korean high school student plunged the global bitcoin market into chaos.

Over the weekend, it was reported that the high school student in Seoul faked a bitcoin “hard fork” in order to manipulate the price.

A hard fork is a type of software upgrade that changes certain codes of the bitcoin protocol with the potential of ultimately creating two completely different coins.

The student’s role is still unclear but the market capitalization of bitcoin plunged temporarily by some 50 trillion won ($46 billion), or seven percent.

The government also said it will restrict “non-residents [foreigners]” from trading cryptocurrencies in the Korean market.

An influx of Chinese investors is believed to be one of the main causes of bitcoin fever in Korea, which is now responsible for nearly 20 percent of the global trading of cryptocurrencies.

According to an official at the Financial Services Commission, all non-Koreans, including those residing in Korea, will be banned from trading on Korean exchanges.

“It’s difficult to confirm exactly how much of the trading in Korea is done by foreigners outside of Korea,” said a spokesperson from Bithumb, Korea’s largest cryptocurrency exchange.

“Already, traders must have Korean bankbooks [passport-size ledgers issued by banks in Korea] in order to deposit and withdraw cash from trading, which means there is already a measure in place that filters out many foreign traders.”

Other than minors and foreigners, local financial institutions, including commercial banks, will not be able to participate in cryptocurrency investment, which the government said would prevent “stimulation of investment sentiment.”

Financial companies inside the scope of government regulation will not be able to possess or sell virtual coins, or acquire them as a type of collateral.

“We will review the taxation policy on cryptocurrencies by other countries comprehensively,” said the government in the press release.

The government also reiterated its stance against initial coin offerings, a process of raising capital by selling new tokens, which the government banned in September, saying it will impose punitive measures on any exchanges involved in the activity.

“Tokens” is a term used by the industry to denote cryptocurrencies.

The meeting took place two days ahead of a task force meeting slated for Friday, during which the Ministry of Justice is expected to come up with more specific and stricter measures on cryptocurrency trading.

Some local banks are cooperating with the government’s push to put curbs on bitcoin trading by suspending accounts held by the country’s cryptocurrency exchanges.

Major players such as Woori Bank and Shinhan Bank as well as state-run financiers Industrial Bank of Korea and Korea Development Bank will all stop issuing new accounts for bitcoin traders.

But a spokesperson at Woori Bank said that the move is not meant to terminate the cryptocurrency accounts for good.

“The government recently suggested that banks establish a system to fend off money laundering attempts in running cryptocurrency accounts,” the spokesperson said.

“So, this is a transition period where we are building the system. Once we finish the process, we will discuss whether the bank will resume the opening of accounts,” he said.

The Industrial Bank of Korea will keep existing accounts while suspending the issuing of new ones.

On the same day, it was announced that Bithumb was fined by local authorities after its server was hacked earlier this year.