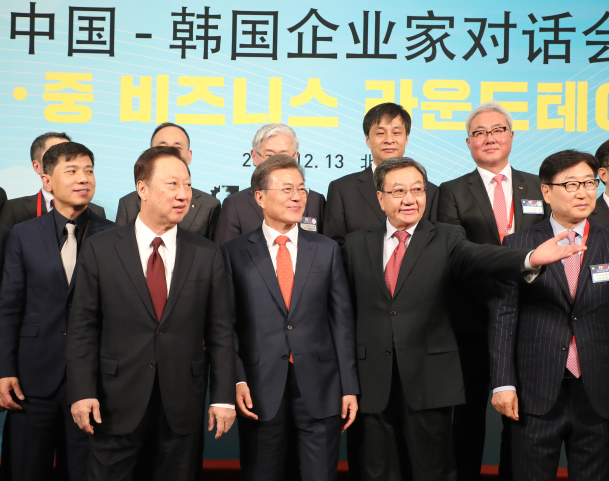 President Moon Jae-in, second from left in the front row, listens to remarks by Jiang Zengwei, chairman of the China Council for the Promotion of International Trade, to his right, at the Korea-China business roundtable event on Wednesday at the Diaoyutai State Guesthouse in Beijing. [YONHAP]

BEIJING - President Moon Jae-in urged China on Wednesday to create an institutionalized system of economic cooperation free of disruption, proposing a wide range of joint projects to safeguard stability and continuity of the two countries’ exchanges.

“The two countries recently experienced a difficult time,” Moon said in his speech at the Korea-China Business Forum, one of major events in his four-day trip to China aimed at normalizing Korea’s economic and diplomatic relations with China after they were strained by Beijing’s unofficial sanctions against Seoul for the installation of a U.S. missile shield.

Without mentioning the row over the missile shield known as Terminal High Altitude Area Defense (Thaad), Moon said he understood that the suffering was particularly harsh for Korean businessmen. “I hope my visit will reassure friendship and trust between the two countries and improve cooperation in all areas to the next level,” he said.

Moon assured that the policies of his government shared many similarities with the values and principles promoted by Chinese President Xi Jinping during the Communist Party’s 19th Congress in October.

In particular, he noted that Xi’s goal of building a “xiaokang” society, where most people are moderately prosperous, was similar to his policy of a “people-centered economy” aimed at increasing household incomes.

“For future-oriented economic cooperation, I want to propose three principles and eight projects,” Moon said. As the first principle, the president proposed the two countries institutionalize a framework of cooperation and exchanges, an apparent move to protect economic ties from political effects.

“Moon stressed the importance of institutionalization, stability and continuity because he does not want overall economic relations to be placed on a roller-coaster ride again due to unrelated issues like Thaad,” a presidential aide said.

Second, Moon proposed the direction of cooperation push forward the two countries’ economic strategies. He said a mutually beneficial structure should be created to expand their industrial cooperation and jointly enter new markets.

For the third principle, Moon said bilateral cooperation should focus on exchanges of culture and people to bolster friendship. The president presented eight specific projects to implement the three principles. Many were designed to prevent further disruption in economic exchanges due to political controversies.

“For stable economic cooperation, we have to strengthen an institutionalized framework,” Moon said. “At the summit with Chinese President Xi, I will sign an agreement to start follow-up negotiations to upgrade the Korea-China free trade agreement to include the service sector and investment.”

He also proposed routine communication between government ministries of both countries. Energy and environmental projects were also on the menu. Moon proposed a joint energy development project for the Northeast Asian region and a global program to reduce pollutants from China.

Because they involve multiple international parties, the projects are seen as insurance for Korea to continue economic cooperation with China free from bilateral political factors.

Moon heaped praise on Xi’s One Belt, One Road development plan to work with dozens of countries, saying it shares commonalities with his own New Northern and Southern policies of cooperation with neighbors.