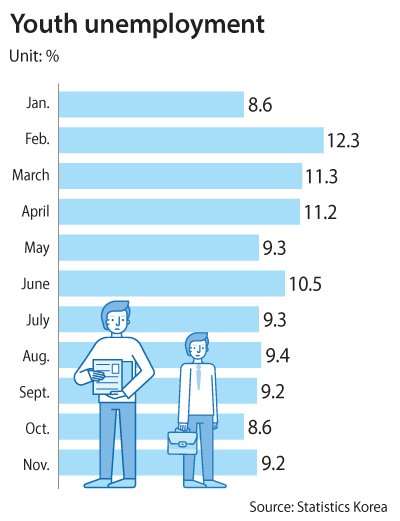 November’s employment report was another sobering one, as job growth fell below 300,000 for a second straight month and youth unemployment continued to remain high.

The Korean economy added 253,000 jobs last month, according to Statistics Korea on Wednesday, for a total of 26.8 million people employed in November.

It was the second month that job growth was well below 300,000, as October saw only 279,000 jobs created. By industry, manufacturing continued to see job growth for a sixth consecutive month as it added 46,000 jobs. Manufacturing accounted for the largest portion of jobs in Korea at 16.7 percent.

The construction industry added 68,000 jobs, while wholesale and retail generated 50,000.

The service sector, however, saw a reduction.

While the number of government jobs rose by 75,000 in November, thanks to a 10 trillion won ($9.15 billion) supplementary budget passed by the National Assembly in July, other areas in the service sector saw significant job loss, including publishing and broadcasting, where 45,000 jobs were cut.

Restaurants and accommodations have especially been hesitant to hire as many of them are small businesses that will face steep labor costs when the minimum wage goes up by 16 percent next year to 7,530 won per hour, the largest increase in nearly two decades.

While 43,000 new self-employed entrepreneurs were reported in October compared to a year ago, that figure dropped to 4,000 last month.

As a result, the government plans to hand out 3 trillion won in subsidies to small businesses, including restaurants, next year.

The number of unemployed Koreans increased by 200,000 last month to total 874,000, moving the unemployment rate up 0.1 percentage point to 3.2 percent.

The government held exams for civil service positions last month. The jobs are coveted for their stability, and many young Koreans will hold out looking for jobs to apply for a government post.

The trend is likely to continue with the National Assembly recently passing a budget bill that will add 9,475 jobs in the government.