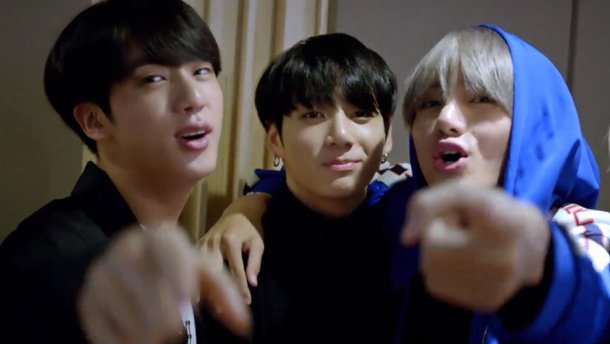 The music video for the BTS song “With Seoul,” made to promote the city, was released on Wednesday. Members Jin, Jungkook and V sing together in the video. [SCREEN CAPTURE]

K-pop sensation BTS released a music video for “With Seoul” - a song promoting the capital city - on Wednesday afternoon, a week after the city released the track.

The video shows an exhausted Seoulite getting energy and motivation from the song. Each member is shown singing in a studio, while a young woman traveling through Seoul makes stops at popular tourist destinations such as Namsan Seoul Tower and Bukchon Hanok Village. She also walks along Cheonggyecheon and Seoullo 7017, which opened in May 2017. For those who do not speak Korean, the city has released the video with English, Japanese and Chinese translations.

The lyrics of the song call Seoul a city that gives hope and smiles to those who needs encouragement. The message goes well with the cheerful pop melody that features gugak, Korean traditional music, and orchestra.

As soon as the music video was released at 4 p.m., Park Won-soon, mayor of Seoul, tweeted a link to the video.

Prior to its official release, JoongAng Ilbo, affiliate of Korea JoongAng Daily, posted a 1-minute preview of the music video to its website. A city official told JoongAng Ilbo that the scenes featuring the group were all filmed indoors because it was difficult to shoot in public.

Immediately after the track was released on Dec. 6, the city’s website froze due to the sudden spike in traffic from fans all around the world. As of Wednesday, number of downloads has reached more than 330,000.

The track was shared on YouTube and Twitter. On YouTube, several lyrics videos of the track have been uploaded by fans, providing viewers the original Korean lyrics, the Romanized lyrics and the English translation. Among the many videos, the most popular one has been viewed 900,000 times as of Wednesday - far surpassing the official version of the lyric video posted by the city.