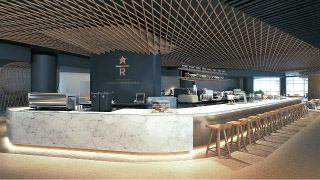 The biggest Starbucks in Korea is set to open next Wednesday.

Located near Jonggak Station in central Seoul, the cafe will take up two floors of the Jongno Tower and measure 1,095 square meters (11,786 square feet) in total, according to a company press release Wednesday. It will adopt various design concepts and services that Starbucks has provided in Korea since opening its first location near Ewha Womans University in 1999.

“In celebration of our 18th year here, the Jongno branch was designed to be a compilation of all the know-how we accumulated during that period,” Starbucks Korea CEO Lee Seock-koo said.

To accommodate both, the cafe will have a triangular bar measuring 25 square meters in the center of the second floor. It will be the largest independent bar set up inside a Starbucks in Korea, the company said, and orders for regular drinks can also be taken there.

In total, the location will offer about 100 drinks, four of which will be exclusive to the Jongno branch. The menu is about 30 percent larger than at a typical Starbucks store, according to the company.

There will be a larger array of food and merchandise as well, with over 60 food items, 10 of which are exclusive to the store. The company said the offerings will mainly be light meals and snacks made from locally-sourced ingredients.

Six zones will offer different services to customers. “Coffee Stage,” for example, includes rooms that groups of visitors can rent for up to three hours. Customers can also receive training sessions from a Starbucks barista at “Coffee Stage,” the company said.