Epic undertaking fails to impress : Fans of the ‘Along with the Gods: The Two Worlds’ webtoon may find the film to be overly sentimental

Epic undertaking fails to impress : Fans of the ‘Along with the Gods: The Two Worlds’ webtoon may find the film to be overly sentimental

The upcoming “Along with the Gods: The Two Worlds,” adapted from Joo Ho-min’s popular webtoon of the same title, will capture the attention of the story’s fans when it hits theaters next week. But those who were hoping for the original story to be preserved will leave theaters feeling unsatisfied or even betrayed by how the script has been dramatized.

None of that, however, was a complete surprise. When the first trailer for the big budget movie was released in late September, the clip was met with criticism by avid followers of the webtoon, mainly for taking out a key character - lawyer Jin Gi-han - and for changing the occupation of the main character, Ja-hong, which plays a key role in determining how the protagonist’s journey unfolds in the story that deals with his afterlife.

Revolving around the brave firefighter Ja-hong (Cha Tae-hyun), who dies on the job, the film depicts his 49-day journey, during which he is judged in seven hells based on the moral deeds he made during his life. How he gets to spend his eternity is determined by the verdict derived over the course of troubling trials.

Upon entering the afterlife, Ja-hong is guided by three grim reapers, Kangrim, Haewonmaek and Deok-choon, played by Ha Jung-woo, Ju Ji-hoon and Kim Hyang-gi. In the original story, Ja-hong is guided by the young yet competent lawyer Jin Gi-han, who was one of the most beloved characters from the webtoon, which was sensational enough to have been adapted into a musical and a game. However, the character was taken out of the film, and the role of defending Ja-hong from the kings of the underworld’s negative verdict was given to the regal, charismatic Kangrim.

“I can’t deny that [the film] may be a disappointment to some of the webtoon’s fans,” said Ha Jung-woo during a press event held in Jamsil in southern Seoul Tuesday. “But I hope audiences perceive this film independently of the webtoon and accept it as it is.”

Though the shift will certainly leave some moviegoers wanting more, the film manages to prove that the change is an efficient way of fitting the lengthy story into a two hour-film.

Another key difference between the film and the webtoon is that the movie connects an unrelated subplot from the original story to the main plot of the movie by transforming a relationship among characters. A soldier who turns into an anger-filled lemur after dying as a result of an accident, for example, turns into Ja-hong’s younger brother Su-hong (Kim Dong-wook), who unintentionally distracts Ja-hong’s trials in the underworld.

“I tried my best to bring all the elements that could be added into the film to the extent that the story doesn’t become one-dimensional,” said filmmaker Kim Yong-hwa, who was behind “Take Off” (2009) and “200-Pound Beauty” (2006). 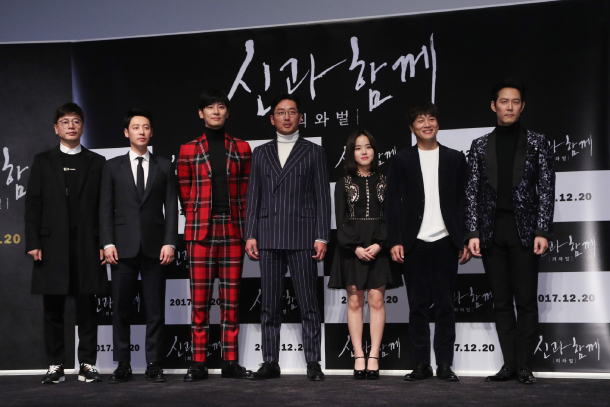 The highly anticipated “Along with the Gods: The Two Worlds” arrives in theaters on Wednesday. Adapted from Joo Ho-min’s webtoon of the same title, the upcoming film is the first installment in a two-part series that follows the afterlife of a firefighter who dies on the job.[LOTTE ENTERTAINMENT]

“Instead of comparing how similar the movie is to the webtoon, I hope audiences focus more on whether the film is entertaining and is able to move their hearts.”

To a generous audience, the alteration of characters and their relationship may be understandable, but the message that it tries to deliver may seem quite out of place. From the point it was revealed that the average office worker Ja-hong from the webtoon had been turned into a righteous firefighter, the direction the filmmaker wanted to take the movie was quite clear: a maudlin tear-jerker.

The assumption turned out to be true. The film stresses the importance of fulfilling one’s duties to their parents and highlights the significance of forgiveness.

“I don’t think a tear-jerking element is necessarily bad as long as it’s not forced,” said Cha Tae-hyun on Tuesday, regarding the controversial element that many Korean audiences have grown tired of. The problem is that it does seem quite forced.

Merely showing the sins committed by Ja-hong to his speech-impaired mother, who is portrayed as nothing more than an angel who has done nothing but unconditionally love her son, is an element powerful enough to force tears out of the audience. And Ja-hong’s continuous cries for his mother throughout the journey, begging grim reapers for the safety of his mother, is another controversial aspect that could raise eyebrows of some audiences who are not into sentimentality.

Despite its limits, however, the CGI-filled movie, presented by Dexter Studios, set new ground in the local film industry by demonstrating that a film with such a high reliance on CGI can also be created in Korea.

“The movie includes lots of CGI-filled scenes, which is a refreshing attempt for local movies. The fact that this genre has been made in Korea is very meaningful, and I expect more of these types of films to be produced in the near future,” said Cha Tae-hyun.

Another notable aspect is the remarkable performance of Kim Dong-wook, who plays a heavy role for a supporting actor. Though he may be a lesser-known face among the other high-profile actors who appear in the film, the actor smoothly carries out his role and leaves a lasting impression.

The upcoming blockbuster, slated for release on Wednesday, is the first installment of the two-part series that cost 40 billion won ($36.6 million) to make in total. Shooting for the two films took place simultaneously, a first in the Korean film industry. The second film is scheduled to arrive at theaters next year.