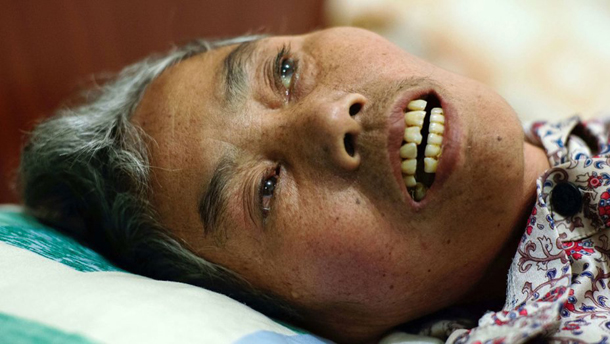 The most striking image from “Mrs. Fang” is the glazed stare of a dying woman, her face frail and unresponsive, her mouth agape with incisors protruding outward like teeth in a skull, as she takes her last breath.

Wang Bing’s documentary about the final days of a Chinese villager suffering from advanced Alzheimer’s was an inspired choice for the Seoul Independent Film Festival, where it screened earlier this month after winning the Golden Leopard at Locarno.

The film does not reveal much about Fang Xiuying, the documentary’s eponymous character, nor does it venture much into her biography. Instead, her near-unconscious body is the subject of an unflinching portrait of a woman lying at death’s door.

Throughout this 90-minute slow-cinema affair, Wang frequently allows the camera to sit on Fang, who struggles to breathe in her cramped environs and is unable to move in her small bed without the help of relatives turning her over. The long takes that linger for minutes on end are painful to watch, but it’s impossible to look away.

Meanwhile, a rotating cast of neighbors, nephews and nieces wander in and out of the room to watch her, more out of curiosity than sympathy. One man makes the plain observation that her condition appears to be worse than the previous day, while another discusses funeral plans by her bedside. Is Fang aware of their presence? Can she hear them talking about her own death? It’s never clear, but the mindless chatter of her loved ones suggest their resigned acceptance that her consciousness is long gone.

Punctuating the dull shots of Fang’s cramped room are equally drab scenes of life around her modest village, where men spend their days fishing for sustenance with old equipment. At one point, a fisherman points out that battery acid leaking from the boat has bleached one of their catch. The butcher proceeds to slaughter the fish anyway. Life here, through the lens of Wang’s camera, is no more remarkable than death.

Wang’s documentaries are notoriously difficult to watch - they are often lengthy, explore the most neglected and impoverished in Chinese society, and eschew theatrics in favor of brutally dispassionate observation - but they make him one of the most celebrated documentarians of our time. His films derive their greatest power from images that challenge and unnerve us.

There is a desire to look away from the haunting close-ups of Fang. We want to avert our eyes from the lifeless stare of a woman so malnourished that her face is almost skeletal, but we can’t help but look because we want to believe that there is still life in her eyes. We hope for a blink, a tear, some sign that there remains a soul inside the corporeal shell of Fang Xiuying.

But there isn’t, and all we are left with in the end is an unforgiving portrait of human decay. We don’t learn anything substantial about Fang, her family, her life or her village. Before our eyes is simply Death doing his merciless work on a woman we barely knew.