‘Reverence… is seeing seniors as part of the community’

‘Reverence… is seeing seniors as part of the community’ 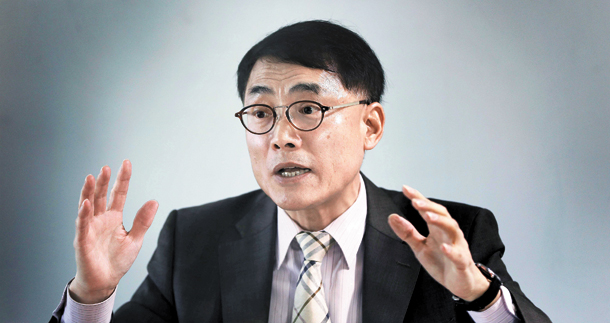 Korea is aging at an unprecedented speed. Since August, people aged 65 and over account for 14 percent of the population, exceeding the size of the population aged below 14. Kim Keun-hong, chairman of the Korean Gerontological Society and a professor at Kangnam University, said Korea’s emergence as an aging society has upset the values of filial piety. In an interview with the JoongAng Ilbo, Kim explained how ageism, or discrimination toward older adults, is becoming a glaring social issue as an unwanted side effect of Korea’s aging population.

Q. Is it true that the British scholar Arnold J. Toynbee praised the filial piety of Koreans?

A. Two years before his death in 1973, Arnold Toynbee is believed to have said, “If there is an apocalypse and humans have to relocate, they need to take with them the filial piety of the Koreans.” He had highly assessed our tradition of respecting our elders. When Toynbee made the statement, the average life expectancy in Korea was 63. Now, it’s 82. We are entering an age of the “Homo 100.”

Are people losing respect for seniors because there are so many of them?

There are currently 6.77 million people over the age of 65 in Korea, but by the end of the year that will exceed 7 million. Because there are so many older people, it seems like the younger generations are feeling pressured. But there’s really not much reverence. Reverence is not pushing seniors into a corner, but seeing them as part of the community. But because society has aged so quickly when the younger generations are still not ready, we are now seeing negative side effects.

What is the definition of ageism?

Ageism could be simply defined as age-centrism or discrimination against older people. The term ageism was coined by British gerontologist Robert Butler in 1969. He was referring to the social phenomenon of older people being treated with prejudice and contempt. In reality, ageism didn’t really present much of a problem in Europe because countries there aged at such a slow speed. The issue has become more evident in Korea. We are no longer the “eastern land of etiquette.”

Why are Koreans not respecting their elders anymore?

It took Korea 17 years for the percentage of people over 65 to increase from 7 to 14 percent. This is a world record. France took 115 years, and Japan took 26 years. These countries had enough time to implement adequate policies for senior citizens as they slowly evolved into an ageing society. Korea lacked both time and preparation.

Why do you think Korea was not ready to become an ageing society?

It’s because of the speed at which urbanization and industrialization were occurring. In the process of compressed and accelerated growth, our traditional values of respect and sense of filial duty faded. We were only focused on individualism and economic growth. Younger generations don’t fully understand why they have to respect their elders. But I think we are all at fault.

What are the characteristics of ageism?

Taxi drivers refusing to pick up seniors, restaurants and cafes forcing them out because they offend other customers and doctors telling them, “it’s normal to feel pain at your age.” These are just scratches compared to the scars left on the heart. Today’s seniors lived through rapid changes. They didn’t have enough time to prepare for old age because they were busy supporting their parents and raising children. They trusted their future generations would provide for them, but that didn’t happen. Older people are judged on their wealth and appearance. Have you ever seen a wealthy and well-dressed older person receiving poor treatment? No. That’s the saddest part.

Aren’t the seniors themselves also responsible for ageism?

People in their eighties usually reminisce about their earlier, more glamorous years. They get called “fogey“ whenever they try to use their age as justification for deserving better treatment. They become insensitive to changes in society, and believe they are being discriminated against even if they aren’t. They should stop trying to only teach things to younger people just because they’re older.

Are younger people also at fault?

Young people nowadays don’t know what reverence is, having grown up in nuclear families. They no longer have the opportunity to learn these values naturally from living with large families. It’s hypocritical for seniors to criticize young people for being disrespectful when they haven’t taught them properly. These problems arose because young people haven’t been educated properly on how to respect their elders. It’s necessary to transform their way of thought through inter-generational communication.

Is the social environment also important?

Older people in Korea work to sustain themselves. On the other hand, those in advanced countries work to feel satisfaction in life. We have to change the social environment, which is leaving seniors with no choice but to work while facing discrimination. As long as there is an environment where seniors have to work to survive, discrimination will not disappear.

Then what do we have to do?

We shouldn’t think of older people as being burdensome or annoying. We have to initiate a movement to improve social perceptions, and incorporate character-building education into the elementary school curriculum. The ethics subject that schools currently provide is not enough. The same goes for middle and high schools and universities. Changing perceptions through education is the most effective.

Is it important to implement proper policies for senior citizens?

Of course. But we are doing the opposite. Free welfare is the lowest quality of welfare but that’s what we are providing now. Advanced countries give seniors money so they can use it to take public transport when they need it. But Korea provides “free” services, which hurt both self-esteem and confidence. We have to help seniors be confident in practicing the right to eat the food and take public transport by paying for the services with their own money. Allowing seniors to ride subways for free is not welfare. We have to help widen their range of choices.

What are your thoughts on using the age 65 as the standard of defining the elderly?

The practice of defining people as elderly according to their age first came into practice in 1889 with Germany’s introduction of its pension insurance. At the time, those over 70 were eligible for pensions. But the average life expectancy was 50 then, so people couldn’t receive the pensions even if they wanted to. In 1916, they lowered the eligible age to 65. That standard is now being widely used across the world. Actually, there is no law in Korea that defines the elderly as people over 65.

Who are considered senior citizens in advanced countries?

Since 2005, countries have been gradually pushing the defining age of senior citizens from 65 to 67. Germany, Sweden and Spain are all making this change. This may be the right response given the rising life expectancies.

What are your thoughts on the proposal of the former chairman of the Korean Senior Citizens Association to push the defining age of senior citizens to 70?

Though it is a proposal I can sympathize with, the change has to be made conditionally. Advanced countries have adequate social security systems in place as they’re pushing the defining age of seniors to 67. But Korea still lacks such systems. Our basic monthly pension is a mere 200,000 won, and even this amount fluctuates with different administrations.

Is it logical to grant a basic pension of 200,000 won to the bottom 70 percent senior citizens, as is the case now in Korea?

There are some who are calling for greater assistance to the bottom 35 percent instead. But there will be backlash if we take away assistance from the 70 percent. No one likes getting things taken away. Combining pension with responsibility would be most reasonable. For example, we have to urge the seniors to change themselves, by requiring them to exercise or receive continuing education in exchange for the pension. Detailed policies work in real life.