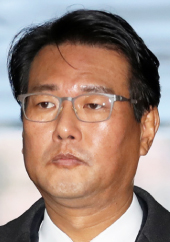 The Seoul Central District Court on Wednesday rejected an application for an arrest warrant for Kim Tae-hyo, a former senior secretary for national security strategy for the Lee Myung-bak administration, who faces allegations of being involved in the military’s illegal intervention in domestic politics.

Prosecutors sought an arrest warrant for Kim, a Sungkyunkwan University professor, who is suspected of acting as a link between the military and the Lee Blue House, for which Kim served in from 2008 to 2012, when the military’s Cyber Command conducted political operations before the general and presidential elections in 2012, manipulating public opinion online.

But the court said, “There is room for dispute on the suspect’s role and participation” in the allegations. It added that objective evidence has already been collected, and there was low likelihood of Kim fleeing the country, which was why it decided to reject the issuance of an arrest warrant for him.

The Seoul Central District Prosecutors’ Office raided Kim’s home at the end of last month, confiscating documents, and he was also barred by prosecution from leaving the country earlier on Nov. 14.

Kim was the first member of the Lee Myung-bak Blue House to be investigated over the military’s illegal domestic political operations.

The military’s Cyber Command was accused of ordering agents to manipulate public opinion online by posting comments favoring the conservative candidate and denouncing the liberal opponent.

This comes with the release of former Defense Minister Kim Kwan-jin and Lim Kwan-bin, former deputy minister of policy at the Ministry of National Defense, who have also been accused of involvement in influencing public opinion through the Cyber Command under the Lee administration. They were released last month after the court determined there was room to dispute their arrests.

The prosecution says former secretary Kim collaborated with the former defense chief to deliver former President Lee’s orders to the military Cyber Command between February and July 2012. He was also accused of leaking classified military documents obtained while he worked for the Blue House after he stepped down.

Kim maintained as the court deliberated over issuing a warrant that he “did not directly take part in the military’s political intervention.”

Failing to detain these three key figures of the Lee administration puts a damper on the prosecution’s attempts to determine if former President Lee Myung-bak indeed was behind ordering the military’s political intervention.