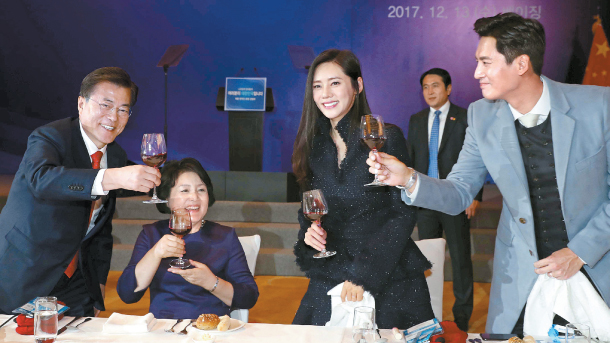 President Moon Jae-in, left, and First Lady Kim Jung-sook share a toast with actress Choo Ja-hyun, third from left, and her husband, Chinese actor Yu Xiaoguang, in Beijing during a meeting with Korean residents in China on Wednesday. Moon arrived earlier that day on a four-day state visit. Moon is set to hold a bilateral summit with Chinese President Xi Jinping on Thursday. [KIM SANG-SEON]

Moon began his trip by meeting with Korean residents. The Blue House invited 500 participants, including the descendants of Korea’s independence activists, highlighting the two countries’ cooperation during their military and diplomatic campaign against Japan’s military aggression in Asia until its defeat in World War II in 1945. During the colonial period, Korea also operated the provisional government in China.

“Korea and China have a long history together,” Moon said in a speech at the event. “When China prospered, Korea also prospered. When China declined, Korea also declined. The two countries experienced hardships of imperialism together, and they also overcame a difficult time together by fighting side by side against Japan.”

Moon also said the Chinese people’s comradeship bolstered the Korean independent fighters’ patriotism, adding that their descendants are the testament of the two countries’ friendship.

Moon also stressed that Korea empathizes with the pains felt at the hands of Japanese brutality. “Today marks the 80th anniversary of the Nanjing Massacre,” he said. “We, the Korean people, have deep sympathy toward this tragedy experienced by the Chinese people. I and the Korean people express sincere condolences to the victims and many others who are still living in pains.”

China estimated some 300,000 civilians and soldiers were killed in a series of murders, torture, rapes and arson in the six weeks after the invading Japanese military entered Nanjing, then the capital city of China, on Dec. 13, 1937. Japan, however, continued to downplay the significance of the tragedy. Some Japanese conservatives even denied the entire event.

In another speech, given at the Korea-China Business Forum later in the evening, Moon also emphasized Korea’s sympathy for China’s suffering during the Nanjing massacre.

“It is a universal value of the human race that there is no justifiable reason for violating human lives and dignity,” Moon said. “Now, Northeast Asia must face history and open up the door for the future and cooperation. To this end, efforts to introspect the past and heal pains are necessary.”

The Blue House also said that Korea’s Ambassador to China, Noh Young-min, went to Nanjing to attend a government-hosted memorial service, instead of receiving Moon at the airport in Beijing. “Other diplomats were originally to attend the memorial, but Moon said it is more appropriate for the ambassador to attend this commemoration observed by the entire nation,” a presidential aide said.

Top leaders, including Chinese President Xi Jinping, attended the memorial in Nanjing, but China’s approach was visibly different from Moon’s emotional messages with an emphasis on Japan’s military past. While Moon mentioned the Nanjing massacre in two speeches, conspicuously missing was Xi’s remark. At the memorial event, Xi remained silent, leaving another senior official to make a speech.

Yu Zhengsheng, head of China’s parliamentary advisory body, urged China and Japan to “take history as a mirror” and work to advance bilateral relations. Yu’s message also did not touch on the longstanding bad blood between China and Japan, though he noted that they share a long history and should promote friendship for the next generations.

Moon is an unreserved critic of Japan, particularly concerning the two countries’ history and Japan’s ambition to build a more powerful military. He already made public his skepticism about Japan having a stronger military in an interview with Channel News Asia last month. He said trilateral cooperation among Seoul, Washington and Tokyo is important to resolve the North Korean crisis, but he does not believe in a military alliance with Japan.

In his two speeches on Wednesday, Moon also avoided directly mentioning a diplomatic row between Seoul and Beijing over Korea’s decision to host a U.S.-led antimissile system.

The deployment of the Terminal High Altitude Area Defense (Thaad) system put Korea-China relations into a tailspin over the past year. Although the Moon administration stressed that the measure was “temporary” to counter North Korean security threats, China carried out a year of unofficial economic retaliations on Korean companies, artists and products. Beijing said Thaad’s powerful radar can spy on Chinese territory.

“I believe you went through such a tough time,” Moon said during his meeting with the Korean residents. “Since I took office, I put efforts to restore the bilateral ties, and China also responded positively to our sincere efforts at the end of October. The two countries agreed to normalize relations in all areas.”