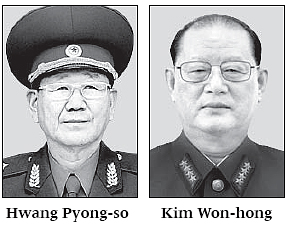 Hwang Pyong-so, director of the North Korean Army’s Politburo and a member of the Workers’ Party’s Central Committee, was expelled from the party for taking bribes, while his deputy, Kim Won-hong, is currently being detained in a prison camp for the same crime, according to a South Korean source who spoke exclusively to the JoongAng Ilbo Tuesday.

If Hwang was indeed kicked out of the Workers’ Party, it would practically mean the end of his political career, and possibly his life, though it is unknown whether or not he is still alive.

Speculation surrounding Hwang and Kim, once known as leader Kim Jong-un’s top dogs, has been high for months since they disappeared from North Korean media without explanation.

South Korea’s spy agency broke the silence late last month when it told a parliamentary briefing that the two appear to have been punished for “impure attitudes” toward Kim Jong-un, a sign that whoever disobeys him will not be handled with kid gloves.

Choe Ryong-hae, vice chairman of the Workers’ Party’s Central Committee and a rising associate to Kim Jong-un, was said to have led a probe into the Army’s Politburo, eventually unearthing their delinquencies. Precisely how they were punished, or for what, was not mentioned.

The source who spoke with the JoongAng Ilbo this week said the duo was punished for receiving kickbacks in the Politburo in exchange for promotions. Upon hearing about this, Kim Jong-un ordered Choe to “punish them as a warning to others,” said the source.

In the worst case scenario, Hwang and his deputy could be following in the footsteps of Jang Song-thaek, Kim Jong-un’s uncle and political mentor, who was considered the second-most powerful man in the regime up until the moment of his arrest in November 2013.

Jang, who at the time served as vice chairman of the Workers’ Party’s Central Military Commission and chief of the Central Administrative Department, was apprehended along with his close aides, kicked out of the party, tried in a special military tribunal and found guilty of “anti-party, counter-revolutionary factional acts in a bid to overthrow the leadership of the party and state and the socialist system.”

North Korea watchers speculated Kim Jong-un made the decision to execute his uncle on that mountain, in light of the fact that the visits often served as a precursor to major decisions.