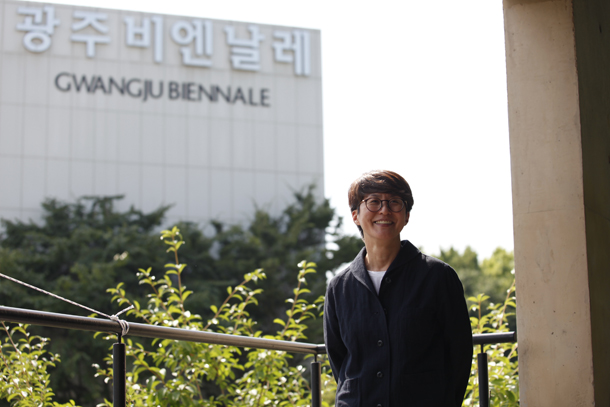 Four Koreans were listed on London-based art magazine ArtReview’s “2017 Power 100,” a ranking of the art world’s most influential people. Among the Koreans, only one has made the list four times - Sunjung Kim. The 52-year-old is the newly named president of the Gwangju Biennale Foundation (GBF) and former director of Art Sonje Center.

“It is difficult to talk about Korean contemporary art history without referring to Kim,” art critic Geun-jun Lim said during a lecture about the brief history of Korean art’s globalization at Hyundai Motor Art Salon in southern Seoul last week.

Korean art entered a critical turning point in the early 1990s. One of the most important exhibitions during this time was “Ssack,” held at Art Sonje Center in central Seoul in 1995. In the show, curated by Kim, artist Lee Bul unveiled the legendary work “Majestic Splendor,” which was made up of raw fish covered in flashy oriental ornaments and left to decay and decompose. Lee is now one of the most internationally famous Korean artists. Most of the other participants in the show, including Choi Jeong-hwa and Ahn Kyuchul, have become some of Korean art’s biggest names.

In the 1970s and ’80s, mainstream art in Korea was divided into two groups that mixed like oil and water: one was a group of modern abstract artists led by dansaekhwa, or Korean monochrome paintings, and the other was the group of minjung artists, or people’s artists, who focused on paintings with messages of social realism against the military regime.

But in the 1990s, a new generation of artists began to emerge - they could not be categorized into either of the existing groups and expressed themselves through installations, found objects, performances, photography and video with diverse messages. Some call them “Korean post-modern artists,” but Kim said in a recent interview with the Korea JoongAng Daily, “I call them contemporary artists rather than post-modern artists, because it is difficult to apply the Western timeline of art history to Korea as it is.”

Influenced by the Korea-born, New York-based pioneer of video art Nam June Paik, whom she met in the early 1990s, she nurtured her senses about the new era of art, in particular while working as an assistant curator of the 1993 Whitney Biennale’s Seoul edition.

Though Kim is from a chaebol family - she is the daughter of Kim Woo-choong, founder of the now-defunct conglomerate Daewoo Group - she has made efforts to establish herself not as a chaebol collector, but as a curator. Although the Daewoo Group was dismantled in the aftermath of the 1997 financial crisis, Art Sonje Center, founded by Kim’s mother, endured because of Kim’s curatorship and artists who are now international stars like Do Ho Suh and Haegue Yang, who had exhibitions there in their early days. The art center has played the role of a cradle for local artists, while introducing new art trends from overseas.

Kim temporarily stepped down from the position at Art Sonje Center when she was appointed president of the GBF in July. The ArtReview described her as “coming into a role that had been slightly tarnished following a censorship scandal that saw then-president (and biennale founder) Yongwoo Lee resign from his post in 2014,” while adding that “Kim’s no stranger to tackling messy politics head-on.”

The magazine added, “She’s already making waves at GBF, announcing plans to include multiple curators at the next biennale (echoing the ninth edition [in 2012], which she co-directed with five international women curators).”

But reactions about the plan are mixed, as Kim also takes on the position of general curator, which involves coordinating the 11 curators in teams to make seven exhibitions under the theme “Imaginary Borders.” Hong Kyounghan, art critic and art director of the new Gangwon International Biennale, wrote in a column in September, “It is unprecedented in the history of Korean biennales that the head of business administration also takes the post of art director. Rights and powers have [generally] been concentrated on one person.”

Accordingly, the Korea JoongAng Daily sat with Kim late last month at the newspaper’s office in central Seoul to talk about her view about the controversies and her plans for the Gwangju Biennale as well as her views on Korean contemporary art. The following are excerpts from the interview.

Q. How would you explain “Imagined Borders,” the theme of the 2018 Gwangju Biennale, and the “invisibly consolidating borders” mentioned in the event’s press release?

A. Many things have happened since November 2016. There were some non-physical borders between the people on the street [and there were both demonstrators for and against then-President Park Geun-hye], as are seen in artist Noh Suntag’s photography. There are borders hardening between generations, economic classes and others in everyday life.

“Imagined Borders” is borrowed from political scientist Benedict Anderson’s term “Imagined Communities,” which he used to explain about the origin of nationalism and geopolitical borders. Now, new borders are being created and the neo-isolationism that led to Donald Trump being elected U.S. President and Brexit taking place are the result of borders being newly made and consolidated in people’s everyday lives.

So we will go with that theme. As part of it, we are doing the “14 years old” project, in which we go to schools and meet young people on the border of being a child and an adult, in order to question what they think about borders and let them discuss it with artists.

What about borders between gender? The topic has emerged as one of the biggest issues in Korea this year.

Yes, it is important. A team of two of the 11 curators - Chung Yeon-shim and Yeewan Koon [who are Korean and Chinese art historians] - will deal with the issue as well as other issues. But I don’t know about the details of each curator’s plans.

This time, the seven exhibitions will be planned nearly independently from each other. I saw the limitations of co-curatorship in the 2012 Gwangju Biennale. This time I will let each team of curators unfold their topic in their own ways. I suggested the idea of “Imagined Borders” as a trigger for their thoughts.

Why have you introduced a multiple curator system to the Gwangju Biennale and by what standard have you chosen the 11 curators?

When I arrived at the Gwangju Biennale office this summer, I found the list of potential candidates made by foundation officials and advisers to select one general art director in the conventional way. But it was difficult to select one person for a general director.

If you want a person experienced in curating a large-scale international exhibition or heading a major museum, it takes a lot of time. If a person working as a chief curator of a major museum is selected as the artistic director of the Gwangju Biennale, the person should take time off from his or her job and the GBF should compensate for that. It requires complicated procedures, and we didn’t have enough time for that. And if a person unfamiliar with large-scale exhibitions is selected, there can be many conflicts between the artistic director and the foundation.

I appreciate the 11 curators for the 2018 edition, because each of them is a candidate with abilities that would qualify them to be an artistic director.

With the 11 curators in seven teams for seven exhibitions, we will use both the traditional venue of the Gwangju Biennale Exhibition Hall and the new Asia Culture Center. The Biennale Hall will have harder exhibitions, while ACC will have relatively public-friendly shows.

There has been some criticism about the multiple curator system. What do you think?

Still, I think this way [the multiple curator system for the biennale] is good. The Istanbul Biennial has three curators. You know there exist only a few curators globally who can direct exhibitions as large as biennales. Accordingly, under the single director system, few curators will take the position of artistic director of each of the world’s biennales in turn, and viewers will come to see similar exhibitions.

In addition, the biennale exhibitions should be made in a relatively short time. So I think it will be better for multiple curators to do this at the same time. But even though I have the will for that, if the people in the art world don’t response positively, then it is difficult for me to push it.

Some say the Gwangju Biennale, which is now one of the world’s major biennales and a top Asian biennale, is attaching excessive importance to Gwangju’s regionality. What do you think?

Regionality is not bad. Unlike the world’s oldest biennale in Venice, other biennales have always dealt with the context of the region where the biennale takes place as an important issue. Gwangju’s history of democratic movements is important not only in the sociopolitical context but also in a broad concept - human rights.

So what I do is thorough research of Gwangju and its sites full of history and give the information to the curators. I, myself, don’t make exhibitions, although people over there tend to think so.

What I also focus on is securing a greater budget and adjusting the procedures and systems for exhibition installations to help the artists and curators make the best exhibitions.

What do you think about the skepticism that the social influence of art is weaker than a movie or a K-pop star’s music video?

Every kind of art has its own role. Fine art has avant-garde qualities as it goes ahead of people. Art is about thinking differently - suggesting and talking about alternative solutions than what the general public thinks.

I think it is similar to science. There are scientists who do research and experiments that most people cannot understand, but still their jobs are important. The translation of artistic language for the general public is needed and is important. And there seem to not be many critics who translate it. For example, Lee Bul’s “Majestic Splendor” looks difficult to understand at a glimpse, but some explanation will help people understand and be impressed by it.

In this context, we are making efforts to reinforce our website to stream forums and talks from the biennale programs and visit artists’ studios. But it always comes down to the question of budget. I want the Gwangju Biennale to be a continuous platform for Korean and Asian contemporary art instead of an event that takes place once every two years. It is my job to make systems for that.