One third of new companies fail in first year

One third of new companies fail in first year 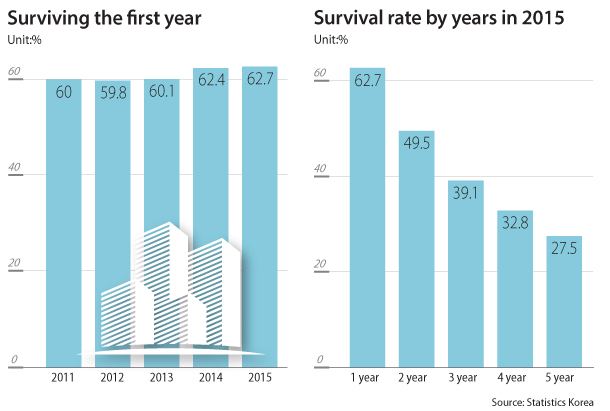 One third of new businesses fail in the first year and the survival rates shrink further with time.

The possibility of surviving a year was lower for companies with sole proprietors compared to bigger corporations.

Among the companies that started off with sole proprietors, only 61.7 percent were able to make it through its first year, whereas for those that kicked off as a bigger companies, 73.1 percent survived.

By industry, electricity and gas maintenance companies had the highest survival rate in the first year - 92.9 percent - followed by health and social welfare businesses with 76.5 percent and logistics with 73.7 percent.

Utility companies also topped the list of companies that survived the first five years, with a 73.5 percent survival rate, followed by real estate agents and lease businesses with 39.3 percent. Logistics came in third with 39.2 percent.

The lowest survival rate in the first year was seen in financial and insurance companies. Only half, or 50.1 percent, were able to survive the first year. They were followed by sports and art businesses (58.2 percent) and wholesale and retail companies (58.8 percent).

Finance and insurance also topped the list of businesses with the lowest survival rate over five years with 16.3 percent, followed again by arts and sports businesses (16.8 percent). Third place was taken by lodging businesses and restaurants (17.9 percent).

But the statistics agency reported some improvements. Last year there were 5.77 million active businesses, a 4 percent increase - or 222,000 companies - from a year earlier.

Among the companies, bigger corporations accounted for 10.1 percent or 585,000. It was the first time that corporate businesses have exceeded 10 percent.

Companies owned by individuals accounted for 89.9 percent, or 5.19 million.

People working in bigger corporations accounted for 57.1 percent of the total workforce, or 11 million, while those working at individually run businesses accounted for 42.9 percent, or 8.2 million.

Also 25.4 percent of manufacturers were owned by corporations, while 99.1 percent of the restaurants and lodging companies are owned by individuals.