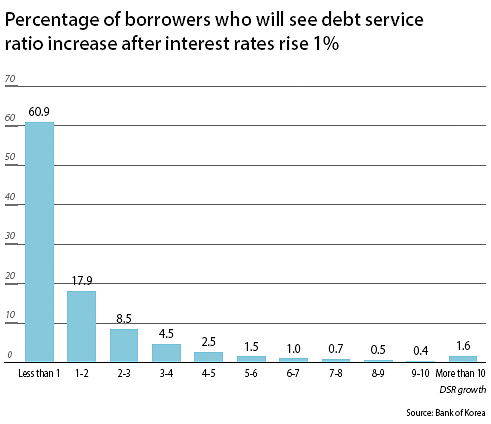 Korea’s central bank said Thursday that future rate increases would not pose a severe burden on households or companies.

In its December financial stability report, the Bank of Korea predicted that a 1 percent rise in the benchmark rate would lead to an average 1.5 percent increase in the debt service ratio.

The ratio measures borrowers’ ability to pay back current debt by comparing their annual net income with total debt obligations. The higher the ratio, the larger the debt obligations are.

The central bank assessed the additional burden would be bearable for the indebted. “Sixty percent of borrowers will see a less than 1 percent increase,” the bank said, “which is not that significant.”

The Bank of Korea noted that low-income populations, those over 50 and the self-employed would be hit harder than other borrowers.

Some analysts have interpreted the assessment as the bank’s intention to continue raising rates going forward, but a deputy governor played down the connection.

“This is just a static analysis of how a 100-basis-point increase in the rate would affect borrowers,” said Shin Ho-soon, deputy governor at the Bank of Korea, “and has nothing to do with the future direction of rate-setting.”

Meanwhile, the governor of the bank said Thursday that the latest rate increase by the U.S. Federal Reserve would have little impact on the Korean financial market, as the move was widely expected.

“The market has long anticipated the Fed’s base rate increase this month,” Gov. Lee Ju-yeol told reporters in a meeting. “The Bank of Korea is focused on the Fed’s pace of rate hikes next year and has kept its 2018 outlook unchanged.”

He added the Fed has remained less “hawkish” than expected despite an upgraded growth forecast.

On Wednesday, the U.S. Federal Reserve raised rates by a quarter of a percentage point to a range of 1.25 to 1.50 percent, citing favorable economic conditions. It suggested there would be three additional rate increases in 2018 and 2019, unchanged from its projections in September.

“The Bank of Korea will decide its monetary policy after carefully reviewing every factor in Korea, including the economy, consumer prices and financial stability risks,” Lee said.

The Bank of Korea has generally maintained the same rate level as the United States. Last month, it raised the key rate to 1.5 percent, the first increase in six and a half years.