Mercedes-Benz likely to be No. 1 SUV importer

Mercedes-Benz likely to be No. 1 SUV importer 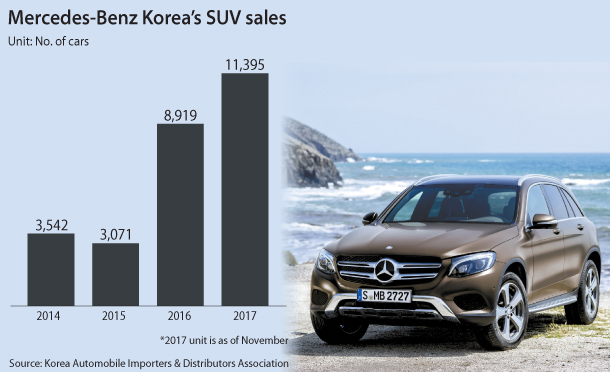 Riding on the back of the global SUV boom that also swept Korea’s automotive market this year, Mercedes-Benz Korea is likely to take the top spot for SUV sales among import carmakers for the first time since it arrived here in 2002.

The Korean affiliate of the German premium carmaker sold 11,395 SUVs this year as of November, according to Korea Automobile Importers and Distributors Association (Kaida) statistics Thursday. This is 38 percent more than last year during the same period.

Land Rover’s SUV sales came in second, selling 9,287 units as of November. The British carmaker took the top spot last year in Korea in terms of SUV sales by an import brand with 10,601 units.

Mercedes-Benz Korea’s success derives from the diversification of its SUV lineup, as pledged by CEO Dimitris Psillakis last year at a media event. Acknowledging the growing demand for luxury SUVs in the Korean market, Mercedes-Benz Korea aggressively introduced new SUV models in the last two years. After launching the GLS and GLE Coupe in the latter half of 2016, it launched the GLC Coupe in April this year, the seventh model in its lineup here. It now has the largest SUV portfolio of any import car brand in Korea.

It also launched a revamped version of its small SUV, the GLA, in September.

“We not only expanded the lineup, but Mercedes-Benz Korea will also take decent care of after sales and marketing as well,” the spokesman added.

SUVs did not make up a significant portion of Mercedes-Benz Korea’s sales in the past. It used to have an apparent competitive edge for its sedan lineup, not its SUVs. In fact, SUVs only accounted for 6.5 percent of its sales in 2015. The portion jumped to 17.6 percent this year as of November.

Sales of SUVs at BMW, well-known for its premium SUVs, also accounted for nearly 17 percent this year, according to Kaida.

SUV sales are not the only area where Mercedes-Benz Korea has had a particularly good 2017.

The company became the first imported brand to sell more than 60,000 units this year. Its bestselling model - the E-Class - sold 30,000 units, which is also a record for an imported car.

“Korea’s import car market has been stagnant for the past two years. But it is likely to get lively again and break the 250,000 mark with the start of Audi and Volkswagen’s sales,” said Yoon Dae-sung, vice president of Kaida.