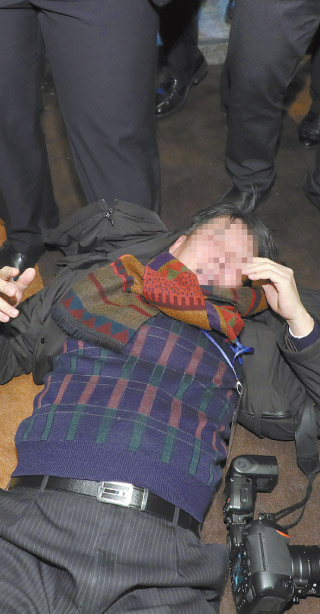 A photojournalist from the Hankook Ilbo is seen on the ground Thursday after more than 15 Chinese security guards punched and kicked him at a Korea-China trade event in Beijing attended by President Moon Jae-in. [YONHAP]

The Blue House said it lodged a strong complaint with the Chinese government through the Foreign Ministry. A senior presidential official said an investigation is ongoing to identify assailants and it was unclear whether they were Chinese security forces or agents of a private contractor hired by the Korea Trade-Investment Promotion Agency for the event.

Following the beatings, the two reporters were treated by the presidential medical team at the Diaoyutai State Guesthouse, where Moon is staying for the state visit. They were later moved to a hospital because of the seriousness of the injuries to their heads and faces.

According to a reporter who witnessed the incident, the Chinese security guards used violence on two separate occasions against two reporters.

The first incident took place when the Korean press tried to follow Moon as he was moving between exhibition halls at the Korea-China Economic and Trade Partnership after giving a speech. The Chinese guards tried to stop the press from following Moon and the presidential entourage as they moved to another exhibition hall.

As reporters protested en masse, one photojournalist from Hankook Ilbo was grabbed by the collar and knocked to the ground. The Chinese guards blocked other journalists from taking photos of the situation.

A more serious incident took place minutes later. As the press tried to enter the exhibition hall where Moon was, Chinese guards again blocked them. The reporters showed their press permits, but a more violent scuffle erupted.

After a photojournalist from the Maeil Business Newspaper complained, guards took him to a hallway and started beating him. As Blue House officials tried to stop them, more than 15 Chinese men punched and kicked the journalist as he fell on the ground. He took a severe beating to his face.

According to a reporter who witnessed the incident, Korean presidential aides sought help from Presidential Security Service agents escorting Moon. No help was offered. Some officials from the Blue House were also grabbed and pushed when they tried to stop the Chinese guards’ violence against the reporter.

The incident disrupted Moon’s appearance. He was supposed to stay at the exhibition hall for seven minutes, but because of the violence, he stayed 10 minutes.

“We are taking this violence extremely seriously,” he said. “We decided to make a strong protest through the diplomatic channel and the Foreign Ministry took the necessary steps and demanded a speedy investigation to identify the assailants.”

He, however, dismissed the possibility that Moon would raise the issue in his meeting with Chinese President Xi Jinping later in the afternoon. Moon was scheduled to meet the Chinese leader for a welcome ceremony, two rounds of summit talks, dinner and a cultural performance. The official also said further investigation is necessary to assess the Chinese government’s responsibility in the beatings.

“I was told that there is a high possibility that the assailants are members of a private security contractor hired by our Korea Trade-Investment Promotion Agency,” he said. “About 190 were hired for this event, and an investigation is ongoing to identify the attackers.”

He admitted that Chinese state security authorities were responsible for commanding the guards and that was why the Foreign Ministry protested to China.

The Chinese Foreign Ministry commented on the incident, but dodged responsibility.

“I just heard about the news,” said Chinese Foreign Ministry Spokesman Lu Kang during a routine press briefing on Thursday. “If someone was injured, we, of course, pay attention.

“It is my basic understanding that the event was hosted by Korea for Moon’s visit to China,” Lu said. “Even though Korea is the host, the violence took place in China, so we are paying attention. I will find out more about this by inquiring with the Korean host.

“I hope this is just a small accident,” he said. “Korea and China both put in efforts to prepare for Moon’s visit to China. The two countries have the same goal - that the visit will be a smooth success.”

The event was planned by the Korea Trade-Investment Promotion Agency. For the trade show, Korean companies ran booths to show their products to Chinese buyers. Moon attended the event to emphasize the importance of trade between the countries - which was badly affected by Beijing’s economic retaliation for Korea’s deployment of a U.S. antimissile system.

Although the Korea Trade-Investment Promotion Agency hired the private security company for the event, a senior Blue House official said China’s security forces commanded the guards. “The trade agency does not give any guidelines on how to run the guards,” he said. Criticism started to grow over the Presidential Security Service’s failure to step in. A senior official of the Presidential Security Service admitted that its agents were late in noticing the ruckus.

“We only have a limited number of agents for an overseas event, so we were too late,” he said.

He admitted that the Korean press had been experiencing difficulties reporting in China. “We have been cooperating with the Chinese authorities, but China has a very different way of controlling and restricting the press compared to the norms of other countries,” he said. “It is regretful that this unfortunate incident took place.”