New Koica head discusses democracy and the road ahead

New Koica head discusses democracy and the road ahead 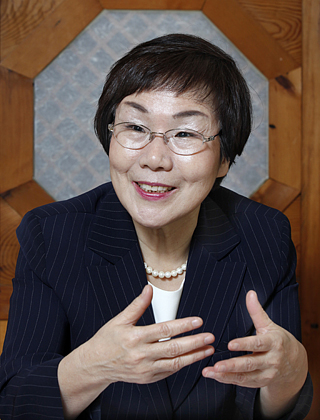 Lee Mi-kyung, the new president of Koica, sits for an interview on Tuesday at a cafe in Jongno District, central Seoul. [PARK SANG-MOON]

Consolidating loans and grants in Korea to improve its overseas aid projects is a major goal, says Lee Mi-kyung, the new head of the Korea International Cooperation Agency (Koica).

“The Republic of Korea has served as a model, an aspiration, for developing countries for its rapid economic growth,” said Lee, “but it’s not just this, and I believe that the driving force behind Korea’s growth was that economic growth was able to happen in tandem with democracy.”

Lee, a former five-term lawmaker, sat for an interview on Tuesday with the Korea JoongAng Daily in a cafe in Jongno District, central Seoul. She added, “I believe with democratization, the effects of economic growth were shared among the people, so these two aspects share a very close relationship.” She was inaugurated on Nov. 28 and received her certificate of appointment from Minister of Foreign Affairs Kang Kyung-wha earlier that day. Lee pointed out, however, that Koica is “in the greatest crisis since its establishment,” as the agency was also mired in the influencing-peddling scandal involving Choi Soon-sil, the close confidante of former President Park Geun-hye.

But, she added, “Crisis can be made into an opportunity,” describing how as a first step, days after she took the post, she launched a 15-member “innovation committee,” meant to enhance the transparency of the agency, and drew up a plan to better enable Korea’s development cooperation efforts, while staying faithful to international regulations and core principles. Koica, founded in 1991, is the government agency responsible for Korea’s aid programs for developing countries.

The budget allocated for Koica next year, which comes completely from taxpayers, is 800 billion won ($73.6 million), over 3 percent higher than this year. Some 42 government agencies and branches oversee around 1,200 official development assistance (ODA) projects.

While Lee is not a diplomat, she said she will use her experience in politics, and as a longtime democratic and women’s rights activist, to effectively carry out the principles and spirit of Koica.

“At a rapid speed the globe has already become one community, and we are all interconnected and living together,” said Lee. “We are linked, country to country, and have to cooperate, as global citizens, to develop, succeed, prosper and enable peace together.” She previously served as a Democratic Party lawmaker in the National Assembly from 1996 to 2016 and was also a ranking member of President Moon Jae-in’s election campaign.

Q. It has been two weeks since you were inaugurated as head of Koica. What are your immediate thoughts?

A. Firstly, it is personally a great honor to become the president of Koica, which plays an important role in Korea’s official development assistance (ODA), and I have great aspirations. However, looking at the problems that confront Koica, we are in the greatest crisis since its establishment. In the past year, amid the Choi Soon-sil influencing-peddling situation, the organization lost some public trust, along with status, and internally, there was also a slump along with unrest. There is a lot to accomplish within a short period of time, but the crisis can be made into an opportunity, as a key stepping stone for the development of Koica.

What have you most prioritized since you took the post?

Within a week, I launched the “innovation committee.” In order to recuperate from a crisis, innovation is needed. The committee is comprised of 10 civilian experts and academics, those who know a lot about Koica and also those who have criticized it, along with five Koica members. The chair is also not from Koica, in order to better listen to outside voices and enable plenty of communication when drawing up a new road map.

What is your most immediate short-term goal as president of Koica?

I find it important to resolve the issue of the fragmented nature of Koica’s ODA architecture, both between our loans and grants, and to unify our grants system, which is spread out among many different agencies. That is why Koica needs to come to terms with how to unify the grants, but each agency has its own logic, so it isn’t an easy task. Because there are problems in effectiveness, transparency and accountability arising from the fragmentation of the grants, there is a necessity to overcome this issue and an important task during my term as president.

You have called for a return to the basic spirit and principles of the international development cooperation. Can you describe what this is?

ODA is about the spirt of humanitarianism, along with poverty reduction, human rights, gender equality and the co-prosperity of humankind through sustainable development, along with global peace. Such a spirit is our important principle and philosophy, in order to carry out our projects. Our projects are likewise guided by the universal principles as outlined in the Paris Declaration [on Aid Effectiveness of 2005].

In your inaugural address, you quoted author Pearl S. Buck’s remark: “It’s better to light a single candle than to complain of the darkness.” What is the spirit of the candlelight vigils, and how does it pertain to Koica?

When we speak of Korea overseas, especially to developing nations, we emphasize our economic growth and how it was achieved. But I think the aspect of our achieving great democratic progress has been less well-known, and received less attention when Koica planned out its programs. Koica tries to play a role in assisting developing countries to achieve the sustainable development goals (SDGs), and we plan to especially put emphasis on the realization of the SDG Goal 16, which includes striving for peace, democracy and human rights.

Korea is one of the rare countries that has been divided for a prolonged period of time and faces threats to peace. Currently, humanitarian aid is provided through methods such as multilateral cooperation in politically sensitive areas. Someday, there may be a time when such aid for North Korea in such a manner would be needed. I believe that as we provide humanitarian aid in countries that are in need right now, we are also creating a basis for aid that North Korea may receive in the future.