Bringing a bit of Pyeongchang to Seoul : Newly-opened exhibits highlight the natural landscape of Gangwon and the history of sports in Korea

Bringing a bit of Pyeongchang to Seoul : Newly-opened exhibits highlight the natural landscape of Gangwon and the history of sports in Korea

Seoullo 7017 at night, left, featuring “Scattering Lights, Gliding Sounds,” by artists Hasan Hujairi, Kim Da-um and Yi Dong-hoon. One of the photographs from “Mountains in Pyeongchang,” by photographer Kim Young-il, above. [GALLERY FACTORY]

With less than 60 days left until the long-awaited opening ceremony of the PyeongChang Winter Olympics, a tangible sense of excitement has begun to fill the air. The host country is busy getting ready to welcome the world and hopes to surpass expectations.

As preparations head into overdrive in Gangwon, Seoul is getting into the Olympic spirit with events throughout the city to celebrate the quadrennial winter sporting event’s debut in Korea.

The two of the ongoing Pyeongchang Olympics projects ready for Korean citizens to enjoy are “SIGNAL LIGHTS, CONNECTED,” a public art project by the Ministry of Culture, Sports and Tourism, and “Korean Sports, A History Written in Sweat,” a modern sports history exhibition by the National Museum of Korean Contemporary History.

The Ministry of Culture, Sports and Tourism’s “SIGNAL LIGHTS, CONNECTED” project has been open to the public since Nov. 28 on Seoullo 7017 in central Seoul, and it aims to bring a bit of Pyeongchang to Seoul.

Seoullo 7017 is a pedestrian road opened on May 20 that was formerly an overpass built in the 1970s to connect the eastern and western sides of Seoul Station.

“The biggest advantage of Seoullo 7017 is its connection,” said Hong Bo-ra, the director of this project. “I realized that by walking across the road several times. Seoul is a very fragmented city in which regional developments are independent of one another. However, I realized that Seoullo is the connecting bridge of the city, with the road leading the pedestrians to 17 different parts of Seoul. I tried to highlight this distinct characteristic of Seoullo to the public with the artists.”

The artists who are a part of the project took Seoullo 7017 a step further and connected Seoul with Pyeongchang under the theme of “Days and Nights.” During the day, people will be able to admire “Mountains in PyeongChang & Sound of Korea” by the photographer Kim Young-il, the “Telepathic Walk,” program by the artist Kim Bo-rahm and “Eyes as Big as Plates, PyeongChang” by the artists Riitta Ikonen and Karoline Hjorth. The latter two exhibitions will begin on Jan. 18.

In the “Mountains in PyeongChang & Sound of Korea,” renowned photographer Kim Young-il, who has been taking nature photographs in Pyeongchang for over 30 years, has handpicked 15 pieces of his work and is displaying them on Seoullo’s round pots for pedestrians to enjoy. He also collected the sounds of Pyeongchang, such as the winds heard on Mount Gariwang, the ring of a bell at Sangwon Temple, or the sound of waves splashing against Daewangam, a rocky island that is known to be the underwater tomb of King Munmu (626-681) from the Silla Dynasty (57 B.C.-935 A.D.). Kim collected all the sounds by himself. 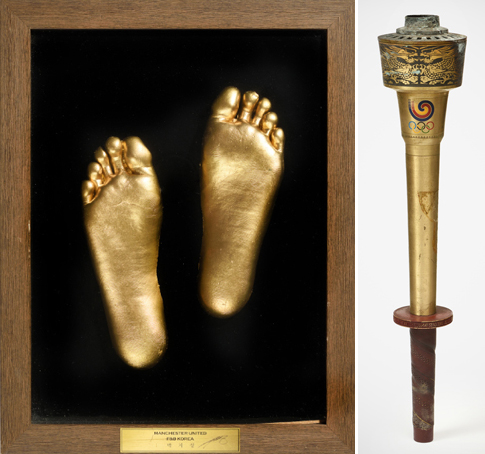 Above, a casting of Park Ji-sung’s feet. At right, an Olympic torch from the 1988 Olympic Games in Seoul. [NATIONAL MUSEUM OF KOREAN CONTEMPORARY HISTORY]

“I hope this excitement and passion for Pyeongchang continues even after the Olympics,” said Kim. “Pyeongchang could be called ‘the capital of the forests,’ and every visitor to the city would agree with me. I want to show the breathtaking beauty of Pyeongchang’s nature and the lives of the people coexisting with that nature. Although the Olympics is a one-time event, the nature of Pyeongchang will stay with us, forever preserved.”

“Eyes as Big as Plates” by the photographers Ritta Ikonen and Karoline Hjorth will be exhibited on 10 round pots along Seoullo beginning Jan. 18. The artists started this project in 2011. They have already been through various major cities in countries such as Finland, Norway, France, the United States, England and Iceland and have continued their work in Pyeongchang. They create “wearable sculptures” made out of natural objects and have people wear the sculptures, so the subjects blend in with the background. By looking into the relationship between humans and nature, the artists have captured cultural aspects of Pyeongchang and create harmony between its nature and its residents.

The other work that visitors can enjoy during the day is the “Telepathic Walk,” in which they can indirectly experience stories of traveling in Pyeongchang through audio. After borrowing devices from Seoullo Traveler’s Cafe, people can walk around Seoullo listening to the stories of three different people traveling to Pyeongchang.

At night, Pyeongchang’s nature and Seoullo will be truly united, with information about Pyeongchang’s temperature, wind directions, wind speeds, weather and humidity transferred to Seoullo using API data in real time. This information will be reflected in the blue lights surrounding the 600 round pots and the 111 poles that decorate Seoullo, as well as the music that plays along the park. The lights and speakers are installed on the 111 poles that stand throughout the Seoullo. The pedestrians walking through the bridge will be able to experience the nature of Pyeongchang with every step they take.

Another project celebrating the Olympics is the exhibition “Korean Sports, A History Written in Sweat.” The exhibition covers the history of sports as far back as the advent of modern sports in Korea from the late 19th century of the Joseon Dynasty (1392-1910), when the concept of physical education and the importance of sports became known across the country.

The exhibit explains how the country struggled to maintain its identity at international sporting events during Japanese colonialism, the athletes claiming victory with Joseon on their minds although they had to compete as representatives of Japan. It is said that many intellectuals and independence activists during the colonial period thought sports were a powerful way to strengthen the spirit of the Korean people, and many placed an importance on their physical health so that they could be prepared to fight for independence.

The exhibit leads visitors through the history of modern sports through uniforms, equipment and photographs.

“When we contacted the descendants of the deceased as well as active athletes explaining the motive of the exhibition, many of them readily lent us their ancestors’ or their own uniforms and possessions, which is basically how this exhibition came into existence,” said Kim Ki-yong, the director of the exhibition.

The space is divided largely into three parts: “The Beginning of Modern Sports in Korea,” explaining athletic history prior to the Colonial Period.

The second part is “The Transition and Takeoff of Korean Sports,” which describes how Korean athletes developed and progressed after Independence, and the beginnings of professional sports in Korea.

Finally, in “The Globalization of Korean Sports,” visitors will learn how Korea became known internationally as an athletic hub by hosting the Asian Games and the Seoul Olympic Games. The exhibit ends with the story of how Korea was named the host of the 2018 Winter Olympic Games. The pristine photographs and uniforms show the hardships that the athletes went through and remind visitors of the difficult but worthwhile road that Koreans took to create a history of athletic success.

The National Museum of Korean Contemporary History is a five-minute walk from Gyeongbokgung Station, line No. 3, exit 5 or Gwanghwamun Station, line No. 5, exit 2. The exhibition “Korean Sports, A History Written in Sweat” will end on May 4, 2018. Admission is free.