The objects of desire created by social media

The objects of desire created by social media 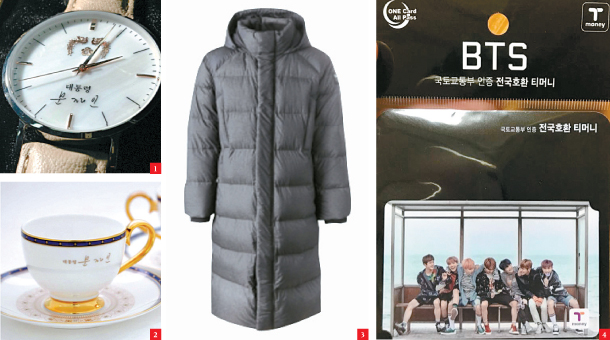 1. A watch given to the visitors of the Blue House by the president. 2. A tea cup with the phoenix symbol is also one of “Moon Jae-in” goods. 3. The PyeongChang bench coat is a product that shows a new consumption trend in Korea among millennials. 4. A T-money card with an image of BTS, a popular boy band. [JOONGANG ILBO, EACH COMPANY]

On Dec. 6, local media giddily reported that President Moon Jae-in ordered 350 pizzas from the Pizza Maru chain for officials at the Ministry of Strategy and Finance. The president threw a pizza party to celebrate the passing of the 2018 budget by the National Assembly earlier in the day.

Once the news spread, Pizza Maru experienced a spike in sales, with some branches enjoying a 40 percent increase.

Korean consumers, led by millennials in their late teens through their 30’s, are spending freely on things they read about on their mobile devices and through social media.

In August, some 300 people formed a queue in front of the post office in Jung District, central Seoul, to buy stamps that commemorate the 100th day since the inauguration of Moon, according to Korea Post. Other “Moon Jae-in goods” include a kind of watch given out by the president to visitors of the Blue House.

“PyeongChang goods” are items associated with the PyeongChang Winter Olympics. The fever for Olympics-associated goods started with PyeongChang bench coats: long, padded coats of the sort athletes wear on the sidelines of games in the winter.

A total of 30,000 bench coats were completely sold out after sales began in late October. Lotte Department Store declared the coat limited edition and sold them on a few select days in November. People waited in line for hours before the sales, some spending a night at designated Lotte department stores.

Pre-orders for Lotte’s PyeongChang sneakers began on Dec. 1 and all 50,000 pairs sold out. While the bench coats were 149,000 won ($137.08), half the price of comparable coats from popular brands, the price of the shoes, 50,000 won per pair, wasn’t much lower than other brands. But their exclusivity turned customers on.

So-called “idol goods,” products associated with singing stars and groups, are a category on their own.

For example, Moonshot by YG Store, which sells diverse products trading on the fame of K-pop stars managed by YG Entertainment, which includes Big Bang, has boutiques in Shinsegae Duty Free shops.

In June, CU, a local convenience store chain, started selling limited-edition T-money public transportation card featuring photos of the members of boy band BTS. They were completely sold out in a month and CU’s T-money card sales tripled in July compared to the month before.

“Starting from Honey Butter Chips to idol goods and long padded coats, these are not daily necessities,” said Jung Ji-won, the CEO of brand consulting firm J&Brand. “People are willing to spend their money for a sense of communication, sympathy or bond rather than based on their needs.”

“It’s not just any pizza but pizza chosen by the president, it’s not clothes that anyone can buy but clothes that are limited-edition … in addition to purchasing and consumption, [Korean consumers] are preferring products with stories to tell,” said Lee Eun-hee a professor at the department of consumer science at Inha University.

The trends are promoted by information technology devices, he said. “People wake up in the morning and turn on their mobile phones to see if there is anything new - not just news but also consumable goods.”

There are, however, concerns of excessive consumption and impulse buying. Some experts also point out that products that gain popularity suddenly due to external factors rather than the competitiveness of the product itself may boomerang on the companies that produce them.

Professor Lee of Inha University said a pizza brand that suddenly experiences skyrocketing sales because of the popularity of the president could experience blowback - their sales could trail off if the approval rating of the president falls.